Study says there is no one 'gay gene,' but thousands of genetic variants linked to homosexuality 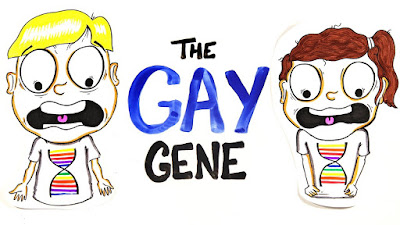 Before the anti-LGBTQ industry has the opportunity to twist this study, we should get abreast of all the facts.

A large scientific study into the biological basis of sexual behaviour has confirmed there is no single “gay gene” but that a complex mix of genetics and environment affects whether a person has same-sex sexual partners.

The research, which analysed data on DNA and sexual experiences from almost half a million people, found there are thousands of genetic variants linked to same-sex sexual behaviour, most with very small effects.

Five of the genetic markers were “significantly” associated with same-sex behaviour, the researchers said, but even these are far from being predictive of a person’s sexual preferences.

“We scanned the entire human genome and found a handful - five to be precise - of locations that are clearly associated with whether a person reports in engaging in same-sex sexual behaviour,” said Andrea Ganna, a biologist at the Institute of Molecular Medicine in Finland who co-led the research.

He said these have “a very small effect” and, combined, explain “considerably less than 1% of the variance in the self-reported same-sex sexual behaviour.”

This means that non-genetic factors - such as environment, upbringing, personality, nurture - are far more significant in influencing a person’s choice of sexual partner, just as with most other personality, behavioural and physical human traits, the researchers said.


The study is significant because it helps to prove that homosexuality is not simply a "behavior" you can switch on and off like a light bulb. But if I know fake experts like the Family Research Council's Peter Sprigg (and I've tracked them enough over years to have some knowledge of their tactics), their talking point will comprise of cherry-picking the study like so:

The study says there is no gay gene, ergo homosexuality is a "learned behavior" which can be "treated."


Of course this is not what the study said, but folks like Sprigg generally don't care.  It's not like this would be the first time Sprigg has cherry-picked science to denigrate us.  So now that you know about the possible deception of this study beforehand, you are prepared for when it comes.

Posted by BlackTsunami at 4:30 PM 2 comments:

'Former NFL player: There are gay, bisexual players on every team' & other Thur midday news briefs

Former NFL Player: There Are Gay, Bisexual Players On Every Pro Football Team - Yep. So true.

Franklin Graham goes berserk over Taylor Swift and the Equality Act: ‘Pushing LGBTQ agenda down the throats of the American people’ - The hypocrite speaks.

'These parents’ brilliant plan to protect their kids from fascist protestors should spread nationwide - This was awesome.

How LGBTQ Wedding Planners Make Big Gay Wedding Dreams Come True- This is so sweet. I love this.
Posted by BlackTsunami at 8:31 AM No comments: