The opponents of marriage equality are afraid to debate this . . .

Certain opponents of marriage equality (whom I won't give the time of day) are whining because lgbts don't want to continue to debate the idea.

When they say "debate,"  what they mean is yet again obscuring the issue and making themselves sound like the victims of a supposed intolerant gay community out to brand them as "bigots" simply because they portray themselves as believers in "traditional marriage."

It's a crock for two reasons. Number one - why should we continue this debate? We did everything the right way and won marriage equality fair and square via the courts. Why is the lgbt community always having to put ourselves in the position to justify our existence or our rights even after we won said rights"? It's an insult to our dignity.

It's less about "protecting traditional marriage," and more about being exploited by fear tactics implying about how gays want to corrupt children, like so: 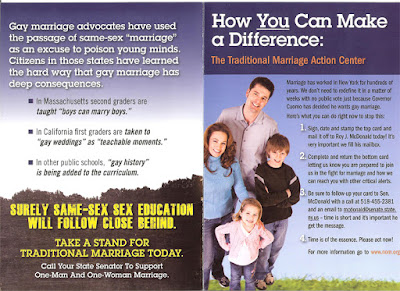 So enough with the pity party. When opponents of marriage equality are ready to discuss the tactics they used to get voters on their side, I might be willing to entertain a debate.

Bear in mind, I said might.
Posted by BlackTsunami at 3:05 PM 3 comments:


Students Wear 'Straight Pride' Signs In Tennessee High School After Gay-Straight Alliance Formed - B comes after A. When the parents act foolish, why should we be surprised when some children copy their behavior.

Anti-gay right angry at Biden for speaking against anti-lgbt violence, persecution - Repeat of this morning's post for those who missed it. The title speaks for itself, unfortunately.

Bill would toss adoption preference for heterosexual couples - This would be a wonderful step in making sure that all children have good homes.

The Olympics Just Became Much Friendlier For Transgender Athletes - Good for the Olympics!

This 'Kiki' Clip Picks Up Where 'Paris Is Burning' Left Off - This is one documentary I am waiting to see . . .

Kim Davis: God Chose Me To Stand Against Gay Marriage - This just in - God apparently looks like and sounds like Kim Davis.
Posted by BlackTsunami at 9:09 AM No comments:

Vice president Joe Biden recently spoke about the persecution of lgbts in other countries during a roundtable discussion in Switzerland:

"LGBT people face violence, harassment, unequal treatment, mistreatment by cops, denial of health care, isolation -- always in the name of culture. I've had it up to here with culture. I really mean it," he said, striking the table with his palms. "Culture never justifies rank, raw, discrimination or violation of human rights. There is no cultural justification. None. None. None."


Of course leave it to the American Family Association's fake news site, One News Now to totally misrepresent his words:


Speaking in Davos, Switzerland, on Wednesday, the VP pressured business leaders to take the lead in pushing other countries to adopt special rights and elevate the status of homosexuals. He then complained about culture.

"I've had it up to here with culture. I really mean it," he said. "Culture never justifies rank, raw discrimination or violation of human rights." He also spoke of a "straightjacket" imposed by culture on people who might otherwise be supportive of the LGBT lifestyle.

Not only did the site omit his entire statement but it also allowed Peter Sprigg from the equally anti-gay Family Research Council to weigh in:

Peter Sprigg of the Family Research Council finds it strange Biden would talk of culture imposing a straightjacket on people.

"... Actually the pro-homosexual movement is dedicated to putting a straightjacket on people and making it impossible for them to even express the view that marriage is the union of a man and a woman or that children do better with a mom and a dad," Sprigg tells OneNewsNow.

The FRC spokesman says "the shoe is really on the other foot, in terms of a culture imposing limits on people" – adding that what Biden is ignoring is that an important part of culture is people of faith.

"It shows a certain contempt for people's religious views for him to say that he's 'had it up to here with culture,'" Sprigg expresses.

He adds that every culture and every religion has the right to pass judgment on whether to believe homosexual conduct is appropriate.

According to an Aug. 9, 2013 issue of Buzzfeed, there are 76 countries in which there are  anti-gay laws and the punishment for breaking these laws are severe:

So a question should be asked. Where does the so-called Christian group the Family Research Council stand on anti-gay persecution? Does the organization approve of people being put in jail, whipped, or even murdered for simply being gay?

It sounds like to me, based on Sprigg's words, that FRC has no problem with these awful acts.  Apparently in FRC's world, having to do your job, even if it means serving gays, is persecution. But being put to death for being gay? That's simply an allowable cultural difference.
Posted by BlackTsunami at 4:57 AM No comments: