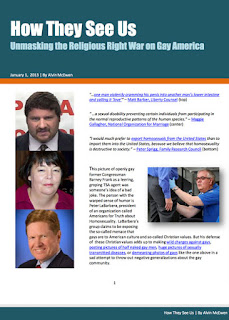 COLUMBIA—While not on the radar of the mainstream lgbt media, an online booklet detailing how religious right groups spread anti-gay propaganda has quietly grabbed many readers and status as one of the best books that many in the community hasn’t heard of yet.

How They See Us: Unmasking the Religious Right War on Gay America was published on Scribd by South Carolina blogger and gay activist Alvin McEwen in January.  Since that time, the booklet has quietly drawn over 18,000 readers, making it one of the top 10 political books on Scribd.

McEwen credits the success to how he and other supporters consistently publicized the booklet by either embedding it on their blogs or tweeting about it on a daily and weekly basis, thus drawing in readers.

“I believe that if you really want a project to be successful, you have to work on gaining that success tooth-and-nail,” McEwen said. “Luckily, recent events have made How They See Us vital to not only members of the lgbt community but also to our allies.”

A Michigan Republican leader, Dave Agema, posted what he called “facts about homosexuality” on Facebook.  These “facts” were such claims as gays molest children at a high rate and are infected with numerous amount of diseases.


Many of Agema’s claims had already been cited and refuted in How They See Us.  And the fact that Agema  pulled his claims from an over 20-year-old piece even proved the basic point of McEwen’s booklet – that the same claims made now by such groups as the Family Research Council, the American Family Association, and other so-called pro-family groups are not facts but old lies rooted in junk science or cherry-picked legitimate science.


Last week, an article on CNN’s webpage asked that question. McEwen felt that while the article attempted to be fair, the writer did not do more to expose the duplicity of religious right and so-called morality groups. McEwen felt the writer should have taken an effort to talk more about the false claims made about the lgbt community; claims which he feels go way beyond expressing a religious belief.

“The danger of the article,” McEwen said, “ is that it gives the inaccurate impression that religious right groups are unfairly victimized simply for expressing religious opposition to marriage equality.   This mindset totally absolves them of the propaganda they have spread about the lgbt community before marriage equality was even an issue.”

Now that his book has enjoyed much success online, McEwen said he is ready to take the next step – getting more hard copies into the hands of people who can use them.  He said his ultimate goal is to create a national conversation on how religious right groups pass along homophobic propaganda under the guise of “Christian expression.”

McEwen is in the middle of creating a hard copy edition of How They See Us which he intends to distribute at pride festivals  free of charge. He said he also intends to mail copies to certain members of Congress, HRC, GLAAD, and also put the word out to many pride centers across the nation that the book is available for their usage free of charge.

“While articles have been written which ask the question of whether or not Christians are being attacked for professing their so-called personal beliefs, there has been very little media attention and virtually NO mainstream articles focusing present-day religious right anti-gay propaganda or how so-called "pro-family" group routinely cherry-pick science to demonize gays. And that’s a real shame,” said McEwen. “My ultimate goal is to change that.”

How They See Us is available for free on McEwen’s blog (to the right) and can also be downloaded from here.
Posted by BlackTsunami at 8:15 PM 3 comments: