Audrey Hepburn and Shirley MacLaine portray the owners of a private school for girls in New England. One of the girls (Karen Milkin) is a hateful little monster who is punished when she is caught in a lie. So she tells a bigger lie to her aunt (Fay Bainter), a wealthy and prominent member of the community, that the two women are lesbians and that she saw them kissing.

The blowback is ugly as Hepburn and MacLaine lose everything and the community shuns them. And it gets worse for MacLaine as this heartbreaking scene shows.

It's an ugly way for someone to come to grips with their God-given sexual orientation and a hard scene to watch. By the way, the child's lie is discovered, but does it even make a difference?

Past Know Your LGBT History postings

Posted by BlackTsunami at 3:26 PM 4 comments: Links to this post

Attacks like this one on Autumn will lead to Pete's Fall - Instead of presenting facts about ENDA, Peter LaBarbera stoops to nasty verbal attacks against individual personalities. And he wonders why his site was chosen as an anti-gay hate site by the Southern Povery Law Center.

Your Take: Why We Need Anti-Bullying Legislation - An excellent editorial

Governor helps agency that lost money over gay marriage - Nice to see a Governor helping his constituents instead of himself.

Words of love? - A reposting

On this lazy Friday, I thought it would be apropo to repost a piece I wrote in November:


This so-called cultural war is all about perception. Those who are on the front lines of opposing lgbt equality like to claim that their position is either religion-based or based upon love.

Their position based upon ignorance and hate. We know this. The only problem is conveying that sentiment to the population.

So, I've decided to remind everyone of 10 statements which I think encompass the actual mindsets of various religious right groups and personalities

As we relax on Sunday, go to church, or watch football, let's take a trip down memory lane (but watch where we step so we don't get it on our shoes) to remind everyone (ourselves included) of the lovely statements and comments of those who purport to be on the "correct" side of this so-called cultural war.

10. Linda Harvey - the former advertising executive who "found Jesus"  and founded the religious right group Mission America. Subsequently this supposedly entitles her to become an "expert" of all things regarding the lgbt community. It allows her to say the following mess:

9. Kevin McCullough - conservative columnist, leader of the so-called "Musclehead Revolution" and an all-around strange character who feels that since he is a man who has fathered a son whose skin is darker than the average African American (his exact words), he can tell the black community just how "evil" Obama is.
Hush up y'all about how "right" McCullough may be about Obama. The point is that his ridiculous comments about the President falls in line with the absolutely inane things he has said about the lgbt community in 2003:

8. Guy Adams - Rounding out the lower echeleon list of anti-gay nobodies is this mean looking fellow, Guy Adams. If you are not familiar with him there is a reason for that. In 2006, the one-time bodyguard of  Alan Keyes said probably the most ugly, rudest thing ever about lgbts. It was so nasty that I don't think that Peter LaBarbera or Matt Barber at their most logically gymnastic could defend it:
The newest thing in Chicago, it's becoming a trend—and you're going to find this hard to believe—sex with infants. It's not enough that they have—you know, when you engage in perversion, and homosexuality is perversion—we don't hate the gays mind you, we don't hate them, we hate what they're doing—pretty soon that perversion is like addiction, it's not enough, so you need to graduate to something else. You need to move on. So now they're having sex with animals, a small group that's getting bigger, sex with infants, sex in the street in Chicago out in the open—it's just getting more and more perverted. So, I just don’t believe that there are a lot of really, really good gays. 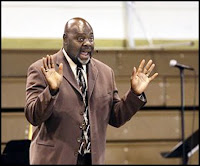 7.  Ken Hutcherson - Of course this list must be multi-racial because ignorant, homophobic comments are like diseases; they know no color, gender, or religion. And who better to put in this list than perennial Microsoft stock threatener Ken Hutcherson. Hutcherson has never met a self-aggrandizing comment that he didn't like.
But the one thing he does not like are polite men because polite men are not macho: 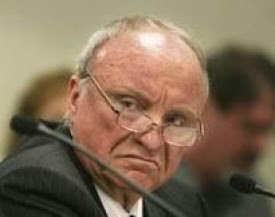 6. Chris Buttars - This lovely Utah representative who looks as if he has a low tolerance for gassy people doesn't necessarily like lgbts. But the folks in Utah seem to like him because they keep electing him to office. Maybe some folks like to hear such comments as:
Homosexuality will always be a sexual perversion. And you say that around here now and everybody goes nuts. But I don't care. They're mean. They want to talk about being nice. They're the meanest buggers I have ever seen. It's just like the Muslims. Muslims are good people and their religion is anti-war. But it’s been taken over by the radical side. What is the morals of a gay person? You can't answer that because anything goes. They're probably the greatest threat to America going down I know of."

Read more »
Posted by BlackTsunami at 4:48 AM No comments: Links to this post