I've never seen the children's show Veggie Tales and after the creator's ridiculous comments about the LGBTQ community, I doubt I ever will.

The co-creator of the Christian-oriented children’s video and TV series Veggie Tales predicts Christian kids’ shows will soon be forced to be LGBTQ-inclusive, but he intends to resist. “Parents are definitely going to have to deal with a growing LGBT presence in children’s media,”

Phil Vischer told The Christian Post. “It’s going to show up more and more as the world has decided that LGBT issues are in the same categories as race and civil rights issues. So to say you shouldn’t have a same-sex couple on Sesame Street is the equivalent of saying you shouldn’t have a black couple on Sesame Street.” The famed PBS show is, of course, secular in nature.

He said that when another secular PBS show, Arthur, featured the wedding of two male characters this year, it was a “shot heard through the Christian parenting world.” It sent “such a strong message of, well, kids, of course you’re fine with gay marriage, because there’s nothing to question about it,” he said, which is “concerning.”

“If I get pressure from Hollywood to show two men getting married because we’ve all decided it’s right and correct, my pushback is: ‘No, I won’t. Because that’s not what I believe is best for kids,’” Vischer continued. “It’s more about what we show as normal rather than explicitly showing something and saying, ‘That’s wrong.’ I’m portraying the positive rather than the negative.”


Mr. Vischer shouldn't think so much of himself to believe that he is going to be coerced into talking about LGBTQ issues or same-sex families. We get it loud and clear that you either want to omit our families or address us from a negative perspective.

And we have enough support out there to not care about you. So don't worry your empty head about being coerced to talk about our issues or our families. We don't need you or your 'vegetables.'

Posted by BlackTsunami at 4:46 PM No comments: 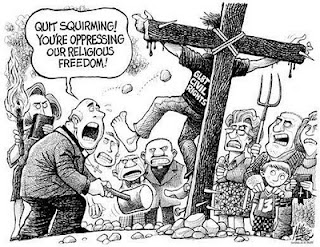 She met her wife at church so the pastor kicked them out. Then he sent them a letter.- Kicking them out was bad enough. Sending an ugly letter a year later was just vile. Be strong, ladies. Don't let those awful folks make you think they speak for God. They don't.

Anti-LGBTQ hate group employee embarrasses herself and her faith via empty attack on SPLC - Reposting my piece from last night.

Palestinian Authority Bans LGBTQ Group's Activities - This is awful.
Posted by BlackTsunami at 8:32 AM No comments: