Editor's note - Several of today's news items spotlights how anti-gay figures are ratcheting up the "crazy" against the lgbt community. The important thing to remember is that these are some of the same folks who crying out for the anti-lgbt "religious freedom" bills because, according to them, gays are trying to destroy so-called traditional values. That's why this morning's post is so important for folks to read and send out:

Pat Robertson: Gays Can Never Be Happy, Call My Network For 'Freedom' From Homosexuality - I admit it. When I was attempting to be comfortable with my gay orientation, I would call Pat Robertson's network. Never mind what I said but to this day, it still amazes me how quickly some people hang up phones.

Okay, let's not focus completely on the crazy anti-gay right:

Conservative Christians Are Still Fighting Gay Marriage, But It's An Uphill Battle Against The Courts - Usually I'm not one for "counting chickens before they hatch," but I think folks can forgive me for going "HA! HA! HA!" just this once.

Same-Sex Couples Still Cannot Marry In Small Pockets Of The U.S. - Even though we have won, there are still puddles of nonsense we need to stamp out.

Texas Clerk Gets The Bill For Her 'Religious Freedom' Claim - Deny the rights, give up the money.

The White House Just Hired Its First Ever Out Transgender Official- Wonderful milestone. But still more work to do. So much work.
Posted by BlackTsunami at 9:08 AM 1 comment:

COLUMBIA, SC -- An online booklet on anti-gay propaganda published in 2013 is enjoying a huge resurgence of readership because it exposes the homophobia behind some of the religious right leading voices who claim their positions are based on religion, not animus. And this is taking place at the very time in which these voices are moving to enshrine anti-gay discrimination into the law under the guise of “religious liberty.”

How They See Us: Unmasking the Religious Right War on Gay America was published by lgbt blogger and activist Alvin McEwen in January 2013. It is a short, graphics-intensive booklet which demonstrates how religious right groups distort research, science, and religious beliefs in order to create negative memes about the lgbt community; memes such as gay men molest children at a high level, the lgbt community has a shorter lifespan than heterosexuals, and that homosexuality in general is a lifestyle more dangerous than cigarette smoking.

At the time of its publishing, the booklet found a receptive audience through social media, particularly on Twitter where much of this conversation played out.


Two years later, the audience has become larger and even more receptive due to SCOTUS declaring marriage equality legal. Religious right groups began converting their message from one of blatant anti-gay animus into one of victimhood against a supposedly encroaching gay agenda in attempts to pass “religious liberty” laws which would legalize various forms of anti-lgbt discrimination.

In response to this, McEwen converted snippets of past homophobic statements made by religious right leaders from his booklet into jpegs and sent them out on Twitter along with a link to the booklet. The response has been immediate and remarkable. In less than a month, How They See Us garnered over 7,000 hits.

McEwen said his actions were an effort to keep these groups from conveniently omitting their past history of homophobic actions and statements.  He also said he has been receiving various reactions from the tweets but he regards it all as positive.

“People have expressed either amusement or repulsion, but the vast majority of them have clicked on the link to the booklet and then began retweeting it,” McEwen said. “And that’s the fact which matters the most as far as I’m concerned. The information is getting out on a level it didn’t before.  People want either new information about these groups or reminders of the homophobia they peddle."

In his booklet, McEwen exposes religious right groups such as the Family Research Council, the American Family Association, and the National Organization for Marriage. One particular group which McEwen focuses briefly on is the Liberty Counsel. The Liberty Counsel has been in the news recently for counseling a Kentucky clerk, Kim Davis, to not give out any marriage licenses to gay couples in spite of the fact that a federal judge ordered her to. The organization would have people to believe that it is solely concerned about Davis’s “religious liberty.” However, unprofessional statements published in McEwen’s booklet - which he also tweeted – by Liberty Counsel member Matt Barber demonstrates how homophobic animus is playing a huge part in the organization’s actions.

McEwen said aside from reminding people about the religious right’s bigotry, awareness of how they stigmatize the lgbt community is important because this stigmatization plays a part in negative lgbt health issues. According to groups such as the Centers for Disease Control, members of the lgbt community do in fact have serious issues with depression, alcoholism, and sexually transmitted diseases. However, the CDC has never said these negative health issues are indicative of being lgbt. Instead, the CDC places the blame on homophobia, societal rejection, and how this causes lgbts to not receive good health care or feel isolated.


“When anti-gay groups and personalities cite CDC data, they emphasize the negative health issues in the lgbt community, but omit that the CDC also said these behaviors are the effects of homophobia and societal rejection,” McEwen said. “By doing this, anti-gay groups add to the aura of stigmatization which create these negative health issues in the first place, which they then exploit to falsely claim that homosexuality is a dangerous lifestyle.  It’s the equivalent of a bully repeatedly striking his or her victim while saying ‘stop hitting yourself’ after each blow.”

How They See: Unmasking the War on Gay America is free and can be accessed directly from Adobe Acrobat by pressing this link.

The following are various other tweets sent out by McEwen: 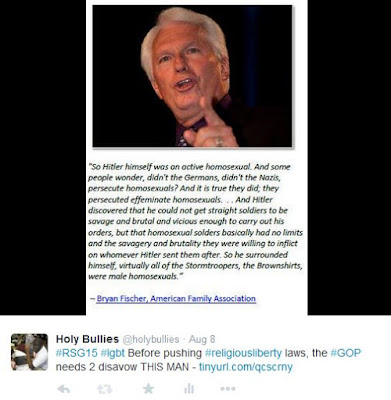 Posted by BlackTsunami at 4:18 AM No comments: