Dave Agema saga exposes the lies of the anti-gay right

After standing by an anti-gay Facebook post last week, Michigan Republican National Committeeman Dave Agema on Sunday took to the social networking site again to claim there are "reems (sic) of studies showing the negative health affects (sic)" of homosexuality. According to a release from Grand Traverse County Republican precinct delegate Dennis Lennox, Agema was responding to a petition that urged the Republican Party to increase inclusivity.


According to Agema, he has "reams of studies" proving homosexuality to be a so-called dangerous lifestyle.  He originally cited information from Dr. Frank Joseph, a physician whom no one has ever heard of.  The information cited is called Everyone Should Know These Statistics on Homosexuals.

But there is something I noticed about Joseph's information which needs to be stated. 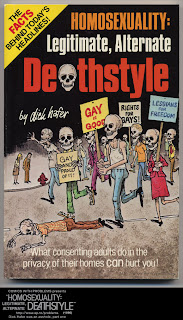 Those who have read this blog should remember this book on the left because I have referred to it many times. It is an awful comic book published in the late 1980s by a man named Dave Hafer called Deathstyle. It, as Joseph's piece cited by Agema, also purported to give "statistics" about homosexuality.

In fact, if one would compare Hafer's comic book and Joseph's piece, one would see startling similarities.

Homosexuals live unhealthy lifestyles, and have historically accounted for the bulk of syphilis, gonorrhea, Hepatitis B, the "gay bowel syndrome" (which attacks the intestinal tract), tuberculosis and cytomegalovirus 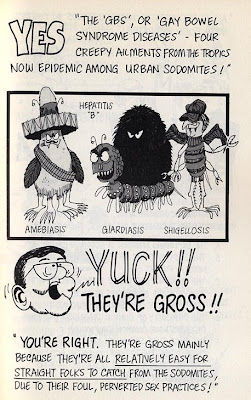 37% of homosexuals engage in sadomasochism, which accounts for many accidental deaths. In San Francisco, classes were held to teach homosexuals how to not kill their partners during sadomasochism. 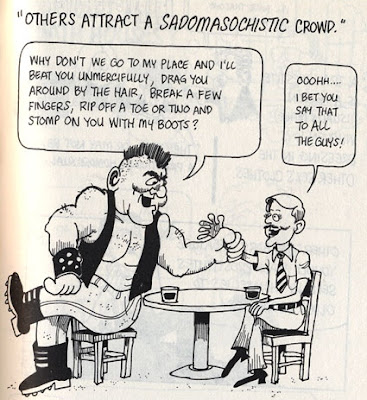 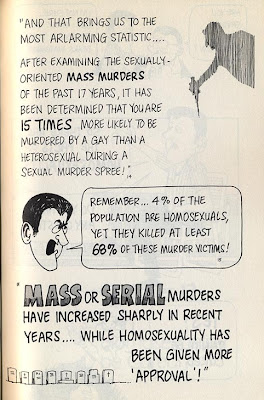 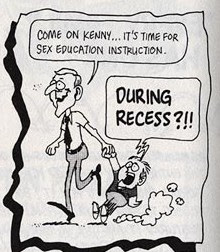 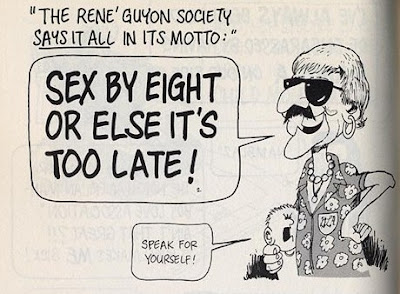 Both Hafer's comic book and Joseph's piece are filled with false information coming from cherry-picked sources published decades ago or just plain bad studies from junk science sources. One source in particular which they both share, Paul Cameron, is a man who has been either censured or dismissed from several medical associations for his bad research methodologies and outrageously homophobic claims. Amongst other things, Cameron has claimed that gay men "seduce" children on a regular basis, that is when they are not stuffing gerbils up their rectums.

In other words, Agema is doing nothing more than citing awful homophobic propaganda created to shock rather than to educate during a time in which the lgbt community didn't have shows like Will & Grace or figures like Ellen DeGeneres going to bat for us and we were seen as "pitiful other."

My guess is that Agema's "reams" of statistics will say the same negative things about lgbts which Hafer and Joseph did because they most likely come from the same place of lies and distortions.

The irony is that this controversy is going on during a seriously positive shift of opinion towards marriage equality and the lgbt community in general.  Religious right groups are now attempting to play the victims and claim that this shift is causing them to be unfairly labeled as bigots.

But Agema's insistence on pushing this information reminds us that these groups are omitting entire chunks of the story, i.e. the portions in which they freely cited the same information as Agema.

And in any conversation about bigotry and homophobia, those chunks of the story cannot be omitted because when one takes the information Agema cites and polishes it up, one finds that while religious right groups are pleading victimhood, they are still referring to these lies as fact.
Posted by BlackTsunami at 3:35 PM 4 comments:

Brian Brown: Anti-Gay March Was What the Civil Rights Movement 'Must Have Felt Like'

Brown on yesterday's 'Meet the Press':

Head of org that's vowed to 'drive a wedge between gays and blacks' says it's a 'slur' to compare gay, black fights

GA GOP Chair: Straights Will Gay-Marry Just For The Benefits - As if they actually need marriage equality to cheat.

How They See Us: Unmasking the Religious Right War on Gay America - cheap plug time. Only 300 away from 15,000 reads. If you haven't read it yet, please do. Also, send it to your friends and family. A definitive take down of the anti-gay right.

New Mormon Ex-Gay Therapy Website Is Rife With Lies And Stereotypes - An excellent example as to why the information in the last brief is needed.
Posted by BlackTsunami at 9:01 AM 1 comment:

During NOM's march at the Supreme Court last week, the right-wing Media Research Center tried to lend the organization a helping hand by interviewing march participants. The interview was pretty much the question of "if you are against same-sex marriage, does that mean you hate gays?" Of course that's nonsense. The question was deliberately simplistic. This entire situation is not about hate. It's about ignorance. However there is no need for me to elucidate. Whether they realize it or not, those who tried to answer this ridiculous question more than proves my point. "Love" like what these folks expressed is love no one needs. You can mark this interview as backfiring: