About the rulings today for marriage equality (Indiana and Utah; Utah's ruling being more far reaching and coming through after I published today's news briefs), let's forget the deliciously negative reaction from Brian Brown and NOM and Tony Perkins and the Family Research Council.

For my money, I am enjoying the sad reaction from old school anti-gay spokesman Gary Bauer:

A lot of you young folks don't know who Gary Bauer . He was the head of the Family Research Council from 1988 - 1999. It was under his auspices that the group specifically and without apology pushed anti-gay propaganda and created false research papers citing junk science studies to demonize lgbts - propaganda and false research papers which caused me more mental harm than I care to admit.

So it is satisfying as well as gratifying to watch the body of junk Gary Bauer helped to create over the years to hurt the lgbt community crumble into dust right before his very eyes.

There is an old saying about giving someone you love "their flowers" while they are living. In the case of Gary Bauer, I enjoy watching him being figuratively pricked by the thorns which he richly deserves.

'Indiana gets marriage equality, Colorado may get mega-homophobe in legislature' & other Wednesday midday news briefs

Town Votes To Give Fired Lesbian Police Chief Her Job Back, Strips Mayor Of Power - In Latta, SC, the controversy involving former - and hopefully soon-to-be reappointed police chief Crystal Moore - is almost over. The first crucial step has been done. Now all the town council has to do is to restore her position.

Gordon Klingenschmitt, The Demon-Obsessed Anti-Gay Exorcist, Wins GOP Primary In Colorado - Meanwhile, apparently those who voted in the Colorado Republican primary may have fallen the victim to "bad pharmaceuticals." Of all the people to win ANY primary or any election to serve in any state legislator, why does it have to be this guy, Gordon Klingenschmitt - the man who has led me to coin the new term "mega-homophobe." The following video showcases one of his "greatest hits." Right Wing Watch has more:

Pastor Says 'Dismal Turnout' At NOM's March For Marriage Helps Satan, Seals America's Doom - FINALLY someone from the opposite side of the spectrum is admitting how much of a failure NOM's march was. Although, if I may be so presumptuous, I think it proves how much God loves lgbts.

The National Organization for Marriage interjected itself in a recent primary for New York Congressional seat by endorsing Assemblywoman Claudia Tenney in her race to unseat incumbent Richard Hanna.

The organization bragged about sending "tens of thousands direct mailers" to people in Hanna's district: 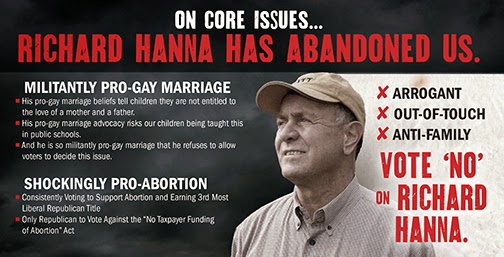 How did work out for NOM and Tenney? According to the Post-Standard:

U.S. Rep. Richard Hanna managed to hold off a Republican primary challenge from the right Tuesday, defeating Tea Party favorite Claudia Tenney in the 22nd Congressional District. With no Democrat on the ballot in November, the win assures Hanna of returning to Congress for a third term. Hanna defeated Tenney 53 percent (15,135) to 47 percent (13,503) in the district that covers eight counties to the north, east and south of Syracuse, according to unofficial election returns with 100 percent of the vote counted.