Not too many people remember Staircase (1969), the story of a two gay hairdressers in a 20 year relationship, even though it starred two legendary actors, Richard Burton and Rex Harrison. There is a reason for this. According to Wikipedia:


Instead of marketing it as the comedy-drama it was, the studio treated it like a camp comedy. It was panned by most critics, including Roger Ebert, who gave it one star in his review and called it "an unpleasant exercise in bad taste . . . Stanley[Donen] gives us no warmth, humor or even the dregs of understanding. He exploits the improbable team of Rex Harrison and Richard Burton as a sideshow attraction." The film was a commercial failure that lost most of its investment.

Rarely seen on television, the film was broadcast by Turner Classic Movies during its June 2007 tribute to gay cinema. Noting this broadcast, a month later film critic Armond White called the film "a rare Hollywood movie to depict gay experience with wisdom, humor and warmth", and "a lost treasure".

Visit msnbc.com for breaking news, world news, and news about the economy
Sorry for the brag but the Huffington Piece piece cited by MSNBC's Lawrence O'Donnell in his very awesome takedown of faux historian David Barton was written by yours truly. Thank you so much Jeremy Hooper for pointing that out. And if I may digress, this does a lot for my day. I have been contemplating for a while whether or not the work that I do in exposing religious right lies is having any effect. I've been doing this for over four years. Not too many people know me. I'm not on television. I do this part time and can't devote as much attention to it as I would like to. So when something like this happens, it lifts my spirits big time.

Will FRC Take Over The "Day of Truth"? - A lying organization taking over a lying event. Talk about your ugly matches.

Walmart Carrying Anti-Gay Book for Children - What the hell is this?

Posted by BlackTsunami at 9:07 AM 4 comments: Links to this post 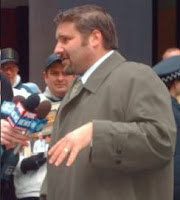 Our "friend" at the Liberty Counsel, Matt Barber - the same person who defends countries persecuting lgbts - is accusing the lgbt community of exploiting the recent suicides of gay youths.

By way of the American Family Association's One News Now:

According to the Cyberbullying Research Center's survey of 4,400, one in five youths between the ages of 10 and 18 have been a victim of cyberbullying or admit to participating in it.

Matt Barber, director of cultural affairs for Liberty Counsel, thinks harassment and bullying of all children should be corrected immediately, but he also finds it "absolutely disgusting to watch as the Human Rights Campaign and other extremist gay pressure groups lick their chops and really rub their hands together over the tragic suicides of these troubled and sexually-confused young men. Before these kids have even been laid to rest, the radical homosexual lobbyists pounced."

He decides those groups are "shamelessly exploiting their deaths in order to further their own selfish political self-interests," and he feels their approach is political exploitation "at its slimiest."

Interesting how Barber and One News Now can refer to these children as "sexually confused" but didn't have the decency to say their names.

These children had names, guys.  Couldn't you have at least said their names? Or the circumstances which led to their deaths.

Naw, you wouldn't do that. That would be acknowledging them as human beings and calling attention to how your nonsense leads to the stigmatization of not only these children but all gay youth in general.

Posted by BlackTsunami at 5:01 AM 2 comments: Links to this post