As it was originally written, Florida's 'Don't Say Gay' bill is a nightmare to the state's LGBTQ community. But a recent change may make the bill more dangerous to LGBTQ kids.

A portion of the bill originally said that school officials must out LGBTQ students to their parents unless "a reasonably prudent person would believe that such a disclosure would lead to abuse, abandonment, or neglect . . ."

In a change suggested by the bill's sponsor, Rep Joe Harding, school officials would be required to out LGBTQ kids to their parents regardless of whether or not it would lead to abuse, abandonment, or neglect.

An amendment was just filed by the sponsor of #DontSayGay to make it even more dangerous for vulnerable kids with a STATE-MANDATED outing of LGBTQ students to parents, specifically in cases of abuse, abandonment + neglect.

This will have devastating consequences for our youth.😢 pic.twitter.com/3s89rcMrMN

The following is the portion Rep Smith is talking about 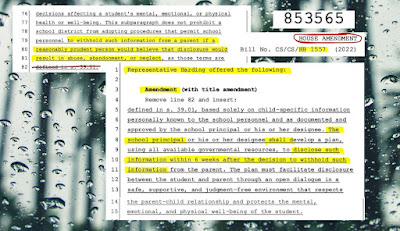 There is no way to put this politely - the alteration of the bill makes things worse. It demands that school officials out LGBTQ kids even if they know that the consequences would lead to abuse, abandonment, or neglect. The new conditions which come along with this are deliberately vague and completely unenforceable. It requires schools officials to come up with some sort of  "plan," but it doesn't require parents to participate.
The irony of the 'Don't Say Gay' bill is that it sprang from the mindset that school officials interfere with how parents are raising their children. The message is that 'parents know best.' But this bill proves that in some cases, parents may not know best. And the continuous maneuvering proves that the sponsor and supporters of the bill know this but when it comes to the well-being of LGBTQ kids, they simply don't care.
Posted by BlackTsunami at 4:41 PM No comments: