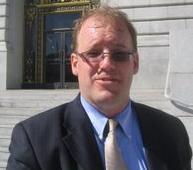 Earlier this month, noted homophobe Peter LaBarbera had some awful things to say about me.

He was talking to Linda Harvey (another homophobic individual who just recently blamed the lgbt community for the mortgage crisis) about his recent pathetic attempt to smear GLSEN (Gay, Lesbian, and Straight Education Network) days before its annual Day of Silence event via a fake controversy involving pictures on a facebook page not even associated with GLSEN:

. . . homosexual bloggers led by Alvin McEwen – an AFTAH-hating extremist with a penchant for twisting facts – began speculating that Americans For Truth might have placed the photos on GLSEN’s Facebook page as a “homophobic smear” to “frame” this homosexual activist organization! Just one more lie from a movement built upon lies…

While Peter's attack on my character is amusing, I believe in never letting an opportunity to rag on the religious right go by without taking full advantage.

To whit, it is true that I do not like AFTAH (Americans for Truth About Homosexuality). And that's because it is a hate group.

AFTAH is not a pro-family group. It is not a morality group. It certainly is not a Christian group.

AFTAH disseminates propaganda and vicious lies about the lgbt community. It is a hate group forged from  the mind of a man (LaBarbera) whose body may be in the present, but mind is stuck in some lurid fantasy world where gay men are leather encased sexual boogeymen, lesbians are baba yaga-type monsters, transgenders are "confused" self mutilators, and same-sex families are entities with lobotomized children trained to believe that they are not being harmed.

And all of these groups assemble together at least once a day in a secret underground chamber where their leader - a bald white man with a scar wearing a neat white Nehri jacket- barks out orders of world domination while lovingly stroking his pet Persian cat.

Any person with a shred of decent common sense would despise AFTAH.

Read more »
Posted by BlackTsunami at 8:24 AM 2 comments: