Minnesota judge overturns state ban on transgender health coverage - Good news and something worth fighting for.

A Survivor Of Gay Conversion Therapy Shares His Chilling Story - Covering all of our bases in this upcoming administration. I'm sure the ex-gay movement is salivating for a comeback.

HRC: Trump’s potential cabinet picks are “horrifying,” “terrifying” - Not even pretty in a way a mother could love.

Baptist Churches in Dallas, Austin Expelled Over LGBT-Affirming Stance - Brave churches in the true spirit of Christ.
Posted by BlackTsunami at 9:08 AM No comments:

A Facebook friend sent me this and I think it needs more press. From The Daily Dot: 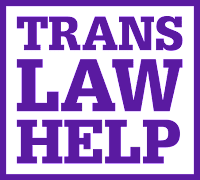 Donald Trump has essentially promised to undo the slow progress that’s been made for transgender rights over the Obama administration. He’s appointed Mike Pence as his vice president, who, as governor of Indiana, enacted some of the harshest anti-LGBT laws in the country, and has said he will appoint a conservative Supreme Court justice. The transgender community is already reeling from his election, with suicide hotlines seeing a spike in trans callers.

But there is good coming from this warranted fear and anxiety: Online, lawyers are reaching out to help trans people protect themselves.

One of the biggest hurdles trans people face is changing names and gender markers on IDs, something that leads to a lot of discrimination and potentially voter disenfranchisement. So Twitter user @dtwps started the hashtag #TransLawHelp to connect trans people with lawyers who could help them through the process before Trump gets into office.

Hashtag creator Riley told the Daily Dot, “I just hoped to make a steady resource for trans people to expedite document changes. Even I planned to use it, actually.” They also said getting this work done before Trump takes office is just a matter of being cautious. “It would be hard to really legislate forcing people to change already changed docs rather than just making new changes hard. So that was a lot of the inspiration for me.”

. . . Trans Law Help now has an official website, where contributors can share law resources for each state.

Posted by BlackTsunami at 4:50 AM No comments: