Religious right reaction to Newtown tragedy has been APPALLING!

In my last post, I defended Christianity in light of a Texas pastor who voiced support of the Ugandan anti-gay bill. The jackasses in these news briefs are making THAT job more difficult:

And the disgusting finale? The following tweet was sent last night by the Liberty Counsel's Matt Barber: 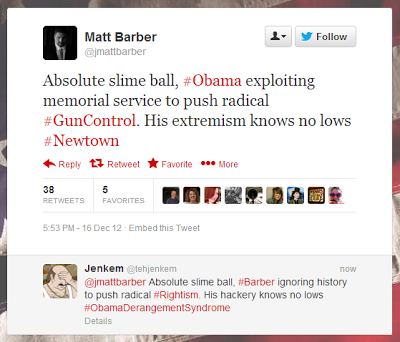 It was a 180 degree turn for Barber who issued a beautiful prayer for the victims of the shooting earlier this weekend.

This shooting has been a colossal tragedy for the country and it is a warning sign to folks who practice true Christianity.

You are losing support because of people like these. If you are going to blame "demonic forces" for people getting turned off of Christianity, you had best check the next Values Voters rally, take a deep sniff, and hope that the overwhelming smell of sulfur don't make you sick.
Posted by BlackTsunami at 10:42 AM 4 comments:

When the evil of men cripples you, God carries you until you can walk again. Time to start walking.

Box Turtle Bulletin provided this video and it ain't pretty.

American pastor David Dykes from the Green Acres Baptist Church in Tyler, TX is very vocal in his support of that awful Ugandan anti-gay bill. He is even saying that if the Uganda passes that bill, "Christians" will put pressure on our government not to cut aid to Uganda and if our government does such, then the Church will try to take up the slack and send resources to Uganda.

Don't even start any nonsense about how supposedly "evil" Christianity is because those who would even consider supporting Dykes are NOT Christians in any shape or form. That goes the same for criticizing the state of Texas.

I feel safe in saying that no amount of spin can make what this man proposes look good.

It ain't gonna happen. Mr. Dykes has the same verbal disease that Mike Huckabee and Bryan Fischer has in that he thinks he can speak for all Christiandom. It's a shame the disease if farther along with him than Huckabee and Fischer.
Posted by BlackTsunami at 9:55 AM 7 comments:

Everything seems so needless by comparison to Friday. I'm sure my fire will return, but for now, I can't process today. Let Patti be our comfort: