Peter Thiel: 'What Trump represents isn't crazy and it's not going away' - With all due respect to my lgbt brothers and sisters of a "lighter hue," it must be nice to be white, male and a billionaire when you are gay. It helps for folks to not call you "fudgepacker" and "faggot" to your face. Even if they are plotting behind your back.

Here’s Exactly Why A Vote For Trump Is Vote Against LGBTQ Rights - And this stuff bounces right off of you while it burns the rest of the community, or as you would probably call them, the "common queers."

Peter Thiel's obliviousness creates historic nonsense - A reminder of what I think of Thiel from July.

One last thing for you folks who will probably tell me to think of things besides my sexual orientation when it comes to this election - why in the hell should I? It's what everyone else does. It's definitely what the Latino community and the African-American community is doing. It's what those folks that always seem be labeled as "middle America" is doing. It's what the "anti-lgbt industry" and their supporters are doing. Why should lgbts be told to be different? Why do we have to play the martyr and sacrifice our comfort and well-being, our families, our future, and our children when we have fears and desires which are no different or lesser than heterosexual America? I say to hell with it. An election is the best time TO be selfish.

Haunted House That Planned To Recreate Scenes From Pulse Massacre Canceled - This entire situation right here is a HOT MESS!

The Great Gay Holiday: A celebration of Halloween’s LGBTQ influence - The history of Halloween and the lgbtq community. A wonderful piece!
Posted by BlackTsunami at 9:16 AM No comments:

Trump and his 12 percent of support in the lgbt community 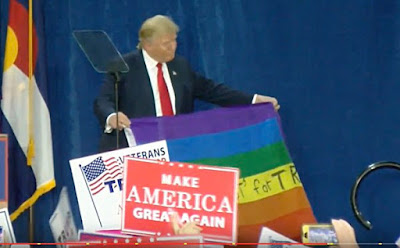 This nauseating image of Trump with a rainbow flag is from a Sunday rally he hold in Colorado. It makes me wish for a recreation of that scene in Raiders of the Lost Ark where the Nazis melted after they opened the Ark of the Covenant.

But save the nausea for more. According to a recent article in The Washington Post, 12 percent of our community supports this wannabe Nimrod. Why? Check out the article:


Photo from Towleroad
Posted by BlackTsunami at 5:13 AM 1 comment: