Yes I could rage like I usually do against the religious right. And there is a time for such things. And sometimes, there is a time to celebrate just being who we are and the following picture of actor Neil Patrick Harris, his spouse David Burtka, and their two children on Halloween is being posted as a sign of celebration and pride for the same-sex families who are raising children and doing it quite well: 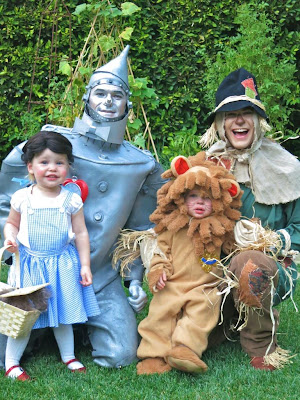 While it is true that not all same-sex families have the means and the funds that this one does, the love and support I see coming from these families (and I know quite a few) are more than all of the riches in the world.

So I have a question for those supposedly moral people out there who are always whining about the alleged homosexual agenda:

Why do you dislike theses families so much that you pretend they don't exist?

Posted by BlackTsunami at 3:27 PM 4 comments:

‘Ex-Gay’ Men Fight Back Against View That Homosexuality Can’t Be Changed - I'm not a fan of the title of this piece, but from what I see, it is a fair article. It's really a sad look at how societal ignorance warps a good gay mind.

Barber & Staver: California Law Banning 'Change Therapy' is a Form of Bullying and Abuse - And this is why the item above is even more poignant.

Today in self-centered, faith-based aggression: NOM's Peters denies my marriage's legitimacy - There comes a point when some folks repeat a ridiculous talking point so many times that you can no longer feel anger towards them. Only pity that they themselves probably don't believe anymore. You will know what I mean when you read the last sentence of NOM's Thomas Peters in this post.

Uganda Parliament May Vote On Anti-Homosexuality Bill By Christmas - This ain't good, folks.

Recently, Vice President Joe Biden took a stand on the rights of transgender Americans, calling discrimination against them the "civil rights issue of our time."

Naturally, some organizations aren't happy with what he did. The Family Research Council in its FRC Update sent out the following:

Vice President Joe Biden must really like Halloween, because now he's fighting for people to dress up all year long! During a stopover in Florida yesterday, Biden struck up a conversation with the mother of a former Miss Transgender New England. In the middle of their exchange, reporters overheard Biden calling transgender discrimination the "civil rights issue of our time." Even by "Biden" standards, it was a shocking statement. With the nation warring over marriage and liberals still making an issue of race, you can see why the press pool wondered if they'd heard Biden right. When the media followed up with the woman, Linda Carragher Bourne, she confirmed the exchange. "[I told him that] a lot of my friends are being killed, and they don't have the civil rights yet. These guys [the President and Vice President] are going to make it happen." How can she be so confident? Unlike a lot of voters, Linda is probably very familiar with this White House's record on sexual deviance.


There is no need to go into detail about what the FRC Update said next. In case you are interested, it went on about how to slur the transgender community as  "sexually confused" and whine about how the Obama Administration is going to supposedly force schools and daycare centers to hire transvestites, transsexuals, drag queens, and drag kings.

It's bothersome trash, which is usual for FRC. But what bothers me the most about this item is the fact except for that trifle mention, not once did FRC go into any more detail about how our transgender brothers and sisters are being murdered.

While the focus is on the Biden statement,  it should be on what Bourne said - that a lot of her friends are being killed.

Bourne wasn't speaking a euphemism. She was most likely telling the truth. Transgender Americans face a considerable amount of ignorance and violence and that needs to be pointed out.

But to the FRC, the fact that Bourne has seen a lot of her friends killed is irrelevant to calling her and those friends "sexually confused." To FRC, the sadness that this woman feels about the murder of her friends is considered as a mere point of flippancy which shouldn't even be given more than a brief mention.

To me, that's sad. And it's certainly not Christian.

And it says sad volumes about the Family Research Council.

Posted by BlackTsunami at 5:17 AM 2 comments: