I kid you not. From Talking Points Memo:

When he learned that South Dakota is poised to become the latest state to face a legal challenge against its same-sex marriage ban, Steve Hickey was inspired to take action. The Republican state House representative and pastor submitted a letter to the editor this week to the Argus Leader, South Dakota's largest newspaper. He titled it "A One Way Alley for the Garbage Truck" and challenged the "medical and psychological communities" to weigh in on the matter.

. . .  "Certainly there are board-certified doctors in our state who will attest to what seems self-evident to so many: gay sex is not good for the body or mind," he wrote. "Pardon a crude comparison but regarding men with men, we are talking about a one-way alley meant only for the garbage truck to go down. Frankly, I’d question the judgment of doctor who says it’s all fine."


According to Talking Points Memo, at the present time the opinion writer who either accepts or rejects letters to the editor,  Brenda Wade Schmidt, has not given a decision on whether the letter will be published. She said there are concerns about its length and appropriate language. To tell the truth, I found the letter to be a bit dull.

Talking Points Memo interviewed Hickey about the letter, which is posted in its entirely on his Facebook page:

Hickey told TPM on Wednesday he was driven to write the letter after Nancy Robrahn and Jennie Rosenkranz, a lesbian couple from Rapid City, S.D., announced their intention to become the first state residents to challenge its gay marriage ban. The couple was married on Saturday in Minnesota in a wedding that was officiated by Minneapolis Mayor Betsy Hodges, setting the stage for South Dakota to become the 29th with a marriage equality court case.


And this, boys and girls, is why we win. Not only can't our opponents not see past their fevered imaginations of gay male sex, but they are in clueless dismay to the fact that not only us but the rest of decent society has.

This isn't Hickey's first swing against lgbt equality. In January, he sponsored a bill which would allow businesses to deny services to anything that would be against the business owners' “sincerely held religious beliefs." At the time, he was quoted as saying that gay rights would take the United States down the road of Iraq.

Posted by BlackTsunami at 3:01 PM 3 comments:

Veteran Offers Up His Burial Plot So That A Lesbian Couple Can Rest In Peace - Every now and then you see a gesture which restores your faith in mankind.

Prop 8 leaders catering to Singapore org. that fights to keep homosexuality criminalized - And anti-gay groups are attempting to add Singapore to their list of foreign countries they invade to demonize lgbts. Gestures like the one in the above post are needed because its stuff like this which makes you lose your faith in mankind.

Finally, A Gay Politician Fox News Can Support - An easy to be exploited one, that is.

Rush Limbaugh Randomly Attacks Don Lemon For Being Gay - My frivolous post for the day. There are just sooooo many things wrong with this.

Klingenschmitt: Transgender Teacher Is A 'Pervert' Who Trying To Recruit Kids 'Into Sexual Perversion' - This is a baseless charge with NO proof. Of course not having proof of their claims has never stopped anti-gay talking heads before.
Posted by BlackTsunami at 9:09 AM No comments:

Editor's note - After reading this post, check out the one which came in early this morning - SC colleges win round over legislators with regards to gay issues


The following tweet by the Liberty Counsel's Matt Barber is homophobia personified:

A golf coach has been been charged with homosexually assaulting three boys & then putting a hit on their lives http://t.co/3ek2BSWZCm
— Matt Barber (@jmattbarber) April 30, 2014

Barber's tweet would be comical if he wasn't exploiting an ugly situation. That's the worse thing about his tweet, i.e. the fact that the only reason he even seems to care about the story is because he can exploit it to denigrate gay men. He doesn't care about those children or the crime committed against them. If it was a man who assaulted little girls, Barber wouldn't give the situation the time of day.

He only cares that a man molested those boys so that he can push the inaccurate notion that a man who molests a boy is automatically gay. This notion has been disproven continuously. And Barber knows this.

And this isn't the first time Barber has defamed gay men via a vicious tweet. The following is his handiwork from last year: 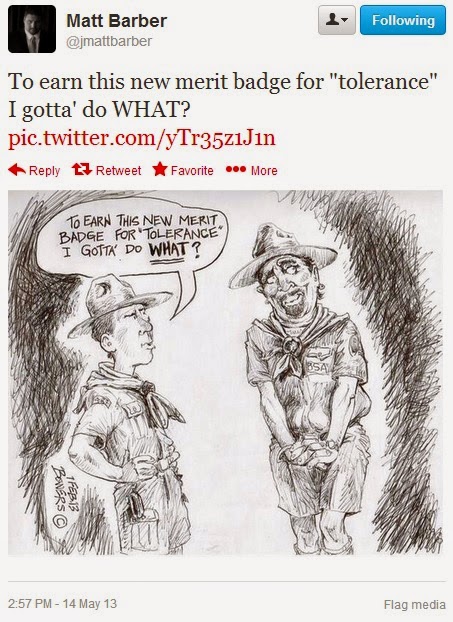