When folks like the Family Research Council and their allies get together for one of their "conferences," they tend drop all pretenses and talk too much. It's as if they get psychologically drunk by coming together and overwhelming themselves with their talk of how holy and righteous they are and how they will get the country to see things their way.

Below is a report via anti-lgbtq hate group the Family Research Council from what it calls its 14th annual Watchmen on the Walls conference . Read this hot mess in its entirety:

"Work like everything is up to you, and pray like everything is up to God." That was Senator Roy Blunt's (R-Mo.) advice to the hundreds of pastors who descended on D.C. for FRC's 14th annual Watchmen on the Wall conference. "The mission of our Watchmen on the Wall ministry is simple," said Dr. Kenyn Cureton, FRC's Vice President of Church Ministries, "We champion pastors to transform America... because the problems we face in America today... are spiritual at their heart and core, and the demand of the hour is for spiritual leadership to step up and engage."

A stellar line-up of spiritual and political leaders joined Senator Blunt, who reminded everyone about the importance of religious liberty. "The church house is the locker room, but the playing field is everywhere else." And that playing field includes Capitol Hill, as Rep. Mark Walker (R-N.C.) made clear. "I've never started a day in Washington, D.C. that didn't start in the Word of God." That should come as a great relief to the men and women in the Hyatt ballroom, who've worked tirelessly to elect leaders who would exert Christian influence on government. After eight years of some of the most radical anti-faith activity, Fox News's Todd Starnes told the crowd, "We are surrounded by cultural bullies, the enemies of freedom are advancing. The time has come to stand resolute." After all, he went on, "We are to be civil lambs, but not silent lambs."

Thankfully, a majority of these pastors are no stranger to boldness. Rev. Mark Harris, who was a first-time attendee in 2012, reminded everyone, "You never know today, how God is going to prepare you for tomorrow." After his trip to Watchmen, he felt convicted to get more involved in the cultural battles of the day. Then, the Charlotte riots happened, and he was prepared. To those who ask should Christians be involved in politics, Frank Turek said, "Politics affects virtually everything we do." When people complain that you shouldn't legislate morality, Turek tells them, "I don't want to legislate your morality. I don't want to legislate my morality. I want to legislate the morality." If there's no standard, then there's no right or wrong, and everything is a matter of opinion. So, whose morality shall we legislate?

Rabbi Jonathan Kahn knew the answer. "America was uniquely founded on the word of God... It's time to become the Elijahs of our day!" Fortunately, most of these pastors are well on their way to achieving that vision. But please join us as we continue to pray for these pastors -- that they may be strengthened to stand and for the Spirit of God to move among us.


It's sad that these "God warriors" didn't talk about ways to improve the quality of life for Americans, particularly those 23 million uninsured people should Congress repeal Obamacare, Or anyone who would be negatively affected by Trump's attempt to cut monies from Medicaid or other programs.

They want so badly for people to worship the way they want and pray the way they want, they don't seem to care that the person praying could be a child who hasn't been fed because there is no food in the house. Or that the prayer could be for his mother who is sick and has no medical insurance.   They are so caught up in  having power and the desire to rule over everyone in the supposed name of God that they have forsaken the basic humility, and simple kindness which comes with being a true servant of God.

But, as nauseating as FRC's report of this event sounds, it's also healthy for those of us who oppose these "God warriors" to bear witness to their ecclesiastical bacchanalia.

It gives us a good reminder of what they really are. And it's something we can show the rest of the world.
Posted by BlackTsunami at 5:45 PM 1 comment: 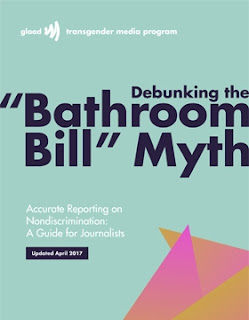 Betsy DeVos Is An Enemy Of LGBTQ People. Always Has Been. Always Will Be. - Hell, I KNEW that. I didn't fall for the early nonsense implying that she was a friend of the lgbtq community.

NBA betrays LGBTQ community by awarding Charlotte the 2019 All-Star Game - But we will still fight against HB2 and bills/laws like it.
Posted by BlackTsunami at 9:07 AM No comments: