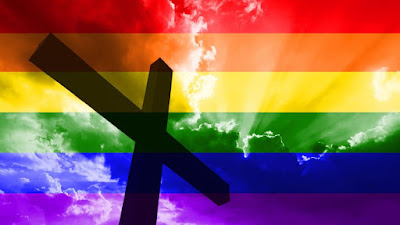 By now, many of us are aware of the ruling in the Arizona case of the studio,Brush & Nib Studios,  which sued to keep from making gay wedding invitations. We are also all aware of just how narrow the ruling was. It didn't overturn a pro-LGBTQ ordinance like the studio and its attorney was no doubt hoping.


. . .  in the carefully worded decision, the justices refused to give blanket protection to all businesses — including Brush & Nib — to simply turn away customers because of their sexual orientation. Gould said it leaves open the question of whether the two women could be forced to produce other products, like place cards for receptions, which do not specifically celebrate the marriage.


We are all also painfully aware of how the studio's victory opens the door - even a little bit - to businesses being able to discriminate against the LGBTQ community. No doubt the anti-LGBTQ industry are planning on ways to exploit this decision.

However in the unfortunate great American tradition of going bonkers before processing all of the information, I think that many of us didn't study the details of how the justices reached the divided 4-3 decision because we were justifiably angry at the decision itself.

I am of the belief that lawyer for the studio (Jonathan Scruggs of the Alliance Defending Freedom, an SPLC designated hate group because of its attempts to undermine LGBTQ equality and safety via a court of law) may have hurt the studio's case because he was looking to either overturn the LGBTQ ordinance or get a blanket exemption What he did in pursuit of this and how the justices reacted may demonstrate why the ruling was so narrow.

From The Arizona Daily Star:

During legal arguments in January, attorney Eric Fraser, representing Phoenix, conceded the city could not force the women to produce custom invitations with obvious endorsements of same-sex marriage. But he told the justices that they could not refuse to produce all invitations based solely on the sexual orientation of the couple.

Jonathan Scruggs, an attorney for the alliance, sought a broader legal shield.

He also introduced several samples of the kind of invitations that Brush & Nib produces. And that apparently paved the way for the justices to decide the issue on narrow grounds — and limit the scope of their ruling.


The Arizona Daily Star went on to say that one of the justices made it a point to say that the studio will not get a blanket exemption from the ordinance for all of its "business operations." Scruggs later claimed said that a broader ruling wasn't his extent.

Still, because he tried to make the case that ordinances protecting the LGBTQ community from discrimination can be considered as anti-religious discrimination, the Arizona justices shot that argument down.

Again, this is not to say that this ruling will not be used against the LGBTQ community in the future because it probably will. But it does show that there seems to be a reluctance to declare  that pro-LGBTQ laws and ordinance are automatically anti- religious discrimination.

It's definitely what the ADF wants to happen, but the group is going to need a better way to weave that poisonous thread.

Sign this petition if Franklin Graham does not speak for you - Something different as a news brief. Trump supporting hypocrite Franklin Graham is obviously targeting presidential candidate Pete Buttigieg because he is openly gay and has the nerve to talk about his own faith. Folks constantly wonder why Graham and his type seem to bogart the conversation about faith. It's probably because those of us on the left who have faith aren't noticed. Here is your chance, even if you aren't a person of faith. Sign this petition from Faithful America and let everyone know that people like Graham don't have own the patent on faith and religion.

Mormon Leader Reaffirms Church’s Opposition To Same-Sex Marriage - And now that same note, neither does the Mormon Church own the patent on faith and religion. This is their beliefs but who cares what they think. We won marriage fair and square.

Shawnee Mission district adds LGBTQ protection despite majority speaking against it - Some of the things these folks were saying is just insane. It's not all about sexual intercourse. Luckily folks spoke in favor of it and the protection was passed unanimously.

Dwyane Wade and Gabrielle Union launch LGBTQ T-shirts after supporting 12-year-old son - I love this!
Posted by BlackTsunami at 8:34 AM No comments: