In between being conveniently silent about how Trump undermined efforts to beat down the coronavirus pandemic and hoping that he picks a conservative justice for SCOTUS, the Family Research Council has found time to spook its supporters about voting. I received the following via an email from the group and president, Tony Perkins: 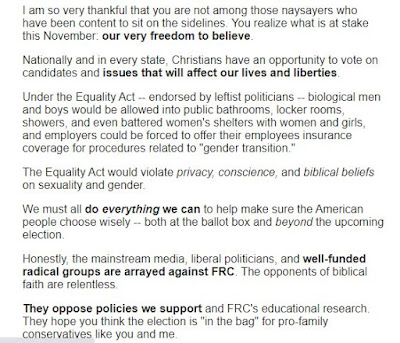 It goes without saying that none of these hysterical attacks on the Equality Act or transgender men and women are true. One would think if FRC were actually concerned with faith and morality, it and Perkins would have at least commented  once about Trump undermining the pandemic.

However, for a group which places itself on a pedestal as an arbiter of faith and morality, FRC depends a lot on fear.   Why change a successful, albeit hypocritical, formula for a seemingly little thing like integrity?

Posted by BlackTsunami at 4:20 PM No comments:

Fabian Nelson could be the LGBTQ lawmaker Mississippi needs - A black LGBTQ lawmaker in the Mississippi State House? I'll believe when I see it, but it has been a year for it.
Discrimination against gay men who can't donate organs is arbitrary, archaic — and deadly - Like it or not, we are attached.
LGBTQ TikTok Users Fear Losing ‘Safe Space’ As Trump Bans Downloads - Even when it's not his prime intent, Trump simply can't stop harming LGBTQ people.
Ruth Bader Ginsburg, champion of LGBTQ rights on the bench, dies at age 87 - Last but not least. We mourn but we also fight. We've can do both at once. God knows how many times we've had to in the past.
Posted by BlackTsunami at 9:43 AM No comments: