On the day of Elizabeth Taylor's passing, the following situation reminds us that we must be vigilant in carrying on her work to eradicate AIDS in our community.

In my state of South Carolina, state budget cuts are causing a huge problem in so many areas. And one area is when it comes to the treatment of HIV/AIDS:

About 7,400 South Carolinians are diagnosed with AIDS, according to the most recent figures from the Kaiser Family Foundation, and the state’s rate of infection is higher than the national rate.

With South Carolina facing a $700 million budget shortfall as the state begins the long recovery from the Great Recession, activists for patients with some chronic medical conditions like HIV and AIDS are finding little support to add funding to programs, as lawmakers cut health care expenses to balance the budget.

The waiting list for the state’s AIDS Drug Assistance Program, which currently covers 2,262 people, has grown to 527 people as of Friday, according to the S.C. Department of Health and Environmental Control, which administers the program.

“I want to believe that they listen, I don’t know if they do,” Smith said of state budget writers. “I hope somewhere in the back of their mind that they are feeling some kind of something for the people.

“People are afraid that they may not get their medication.”

(Julia) Craft and other advocates argue it is cheaper to pick up the cost of drugs than to treat the associated opportunistic diseases that most often kill AIDS patients, among them pneumonia, skin and immune system cancers and bacterial infections. In addition, someone on drug therapy is less likely to transmit the disease — and the cost of treatment — to others.

A report compiled by the Health Law and Policy Clinic of Harvard University recommended a number of strategies to expand HIV and AIDS programs, such as enlisting faith-based groups to encourage testing, treatment and to support federal and state programs. The report also recommends South Carolina apply for a waiver to allow Medicaid coverage of those with HIV.

So far, the the Harvard report has been ignored.

Posted by BlackTsunami at 2:38 PM No comments:

What can be said about Elizabeth Taylor? Legend, actress, humanitarian, the lgbt community's best friend . . .

The video is from the 1993 Academy Awards when she received the Jean Hersholt Humanitarian award for her work in fighting AIDS.


Apple Dumps ‘Gay Cure’ iPhone App After 150,000 People Sign Petition Calling For Its Removal - A major victory spearheaded by Truth Wins Out. This is not a case of free speech but one of a private company being stopped from advocating unsound science. What's next? Creating an app for the support of lobotomies?

Its framers just ran out of quill ink before writing 'evangelical dominion' - What's worse than calling the first black president a boy? Bryan Fischer takes ignorance to another level.

Fort Worth to pay $400,000 to Rainbow Lounge patron injured during raid on gay bar - That's right! Give it up, turn it loose!

Posted by BlackTsunami at 8:26 AM No comments: 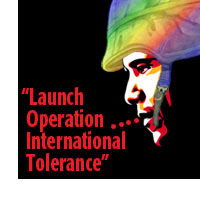 According to People for the American Way, the Family Research Council opposes the Obama Administration's joint resolution with the United Nations that would oppose the criminalization of homosexuality:

While American forces bomb away at Libya, the Obama administration is launching another global offensive: Operation International Tolerance. As he looks on from South America, the President put troops on the ground today for a meeting of the U.N.'s Human Rights Council, where his diplomats plan to strong-arm other countries into embracing homosexuality. In a major U-turn from the Bush years, the Obama administration is actually initiating an "anti-discrimination" resolution to force acceptance of the world's gays and lesbians. . . .

Obviously, FRC believes that homosexuals and transgenders shouldn't be subjected to violence. But this resolution goes well beyond that to endorsing a behavior that dozens of member nations oppose. No binding document of international law has ever recognized a universal "human right" to engage in sex with a person of the same gender. . . Our global neighbors have the freedom to believe that homosexuality is wrong--just as they have the freedom to legislate against any behavior they think is harmful to society. That freedom--and their very sovereignty--would be threatened by this effort.

FRC's condemnation of the resolution underlines the organization's basic hypocrisy. Nowhere in it does FRC give a clear indication of just what the resolution says. It doesn't even provide a link to the policy and I think this is intentional.

Read more »
Posted by BlackTsunami at 7:34 AM No comments:

Fresh from American Family Association spokesperson Bryan Fischer using what can be deemed as a racial slur to describe President Obama, the organization itself has begun making pointed but unproven assumptions regarding the President and the African-American vote in general.

According to the AFA's One News Now, black people who vote for Obama are "choosing their race over their faith."

Ron Miller is a former Air Force captain who later served in the George W. Bush administration. He has been very critical of President Barack Obama and Attorney General Eric Holder for their refusal to prosecute members of the New Black Panther Party for intimidating white voters in Philadelphia in 2008.

But Miller says despite the election of conservative black Republicans Allen West and Tim Scott to Congress, Obama still has the black vote in his hip pocket.

"As I tell some of my friends who don't understand why a race that has such a strong faith-based foundation could then support a man who obviously goes against many of the things that are taught in that faith -- I say, well, that's because whether they admit it or not, they place their blackness ahead of Christ," Miller says.

That's the gist of the article - just a one-sided conversation with an unknown black conservative who makes insulting assumptions about the mindset of the African-American community. No one else is talked to. No other point is brought up. I don't think anyone can honestly ascertain that this article was meant to delve into whatever complexities there may be between President Obama and the African-American community.

It was meant to pander to the potential racial prejudices of One News Now's readers. And I say this because this is not the first time that the AFA has stooped to this level.

In 2008, AFA's phony news service published an article days before the Presidential election entitled Could an Obama loss spark race riots complete with a photo of white policemen holding down an alleged African-American looter. The title is self-explanatory. The comments from some of the readers reached another level of idiocy:

I am so sick of everyone trying to play the 'race' card. Obama is 60-70% Arabic, about 12% black, and the rest is white!! Just because he married a black lady doesn't automatically make him black!!

I work in downtown Baltimore and lately have seen many people wearing t-shirts that read, "Obama 2008 Or Else!" Or else what? Riots? Disruptions? Terrorism American style? What if he is elected? Are we going to pay either way? Who is going to pay? Only white Americans or anyone who doesn't believe or embrace your views? I think that it is ridiculous that after all these years every single white American is being held responsible for the sins of slave traders and anyone else who wronged another because of race. My forefathers were abused and enslaved by Germans...does that make every ancestor of German descent evil in my eyes? No, nore should it. I hold people responsible for their own actions, not the actions of their ancestors. The world has gone mad!

I pray this doesn't happen, but the thought sickens me. I am prepared to defend my property though.

Mr. Corbin is just being truthful. This is something that many of us fear and I am NOT one iota a racist. I would vote for a black candidate in a heartbeat, if he was qualified and not a marxist. But a good man like Alan Keyes can't even get to first base in this wicked country. Obama is NOT qualified, he has TOO MANY scary connections and a questionable past. If he was honest, he would withdraw his candidacy, repent openly and publicly of his past liasons, be honest with the American public and with God, and maybe in 4 or 8 years, God would have a plan for him. But right now, he's not ready. The police and the National Guard need to be ready. It's just a sad truth.


I've been saying this for months -- win or lose there WILL be rioting all over the US in larger cities, and in even in smaller cities. This has been one of the most emotionally charged elections that I can think of in a long time. Call it what you want (racist? I don't think so because past behavior is usually an indicator of FUTURE behavior) but there will be destructive "celebrating" in the inner cities if he wins and destructive vandalism in the inner cities if he loses. Pathetic.

All I can say is bring it on, I am not voting for him and the rest of the country shouldn't be scared into it either. Ive got guns, try looting my house.

It's a shame that One News Now doesn't allow comments anymore. I'm almost dying to read what folks would say about today's article. And for those concerned, One News Now hasn't abandoned it's usual smattering of homophobic nonsense (including an absolutely asinine piece encouraging gay men and lesbians to marry each other.)

Seeing that I am both black and gay, it's feels so nice to be "doubly loved."