Conservative personality Candace Owens making a fascist fool of herself is as customary as a weekday. I am beginning to find it more and more difficult to be shocked by how low she stoops to grift the money.

Still, girlfriend manages to pull a shock out of her cauldron every now and then. Like so:

Candace Owens says parents who take their children to drag queen story hour "are underqualified to have children. They should have their children taken away from them" pic.twitter.com/P5Bk3QIWqo

Really Candace? I mean really? Let's go over this again. Drag Queen Story Hour is a perfectly innocent event enjoyed by kids and parents alike. Owens is simply trying to attach herself to the current right-wing moral panic about drag queens. It's simply another way people on her side of spectrum spook the gullible with lies about LGBTQ people supposedly wanting to harm children.
And what's more, Owens doesn't even try to tell a good lie as shown by this image: 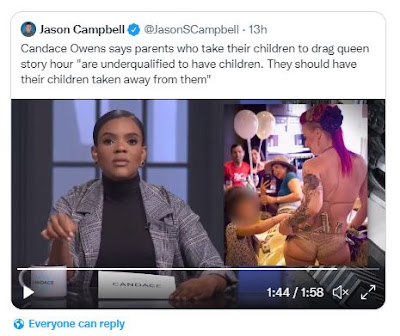 The picture on the screen behind her is not from a Drag Queen Story Hour or any drag show. It is from a 2019 heterosexual burlesque show. Owens is simply the latest far right personality (aside from Babylon Bee editor Seth Dillon and FL Gov Ron Desantis's spokesperson Christina Pushaw) to use the photo to lie about Drag Queen Story Hour and drag queens in general.
Owens even verbally misrepresent the photo behind her as coming from a drag show starting at 1:40.
If folks used logic in this matter, they would ask if Drag Queen Story Hour and the like are so dangerous to kids, then why do right-wing personalities such as Dillon, Pushaw, and especially Owens have to lie to make that argument.
In their defense, logic has no place in the world of grifting, spooking, and clout chasing.
Posted by BlackTsunami at 7:12 PM No comments:

Right-wing media furious over Biden administration effort to protect LGBTQ students from discrimination​ - Acting in scary coordination, they repeat the same lies over and over again.
Drag shows are the latest battleground in the right wing anti-gay disinformation campaign about 'grooming' - One wonders who they will target next.
Fox Sports doesn't show 'Jeopardy' champ Amy Schneider throwing out first pitch - Typical.
Chris Evans doesn’t mince words when asked about homophobes hating on ‘Lightyear’ - THANK YOU!
Mass. commission recommends LGBTQ-inclusive curriculum, anti-bullying protections and training - Wonderful!
Posted by BlackTsunami at 8:57 AM No comments: 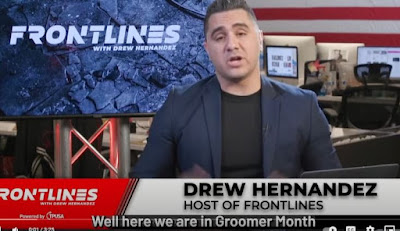 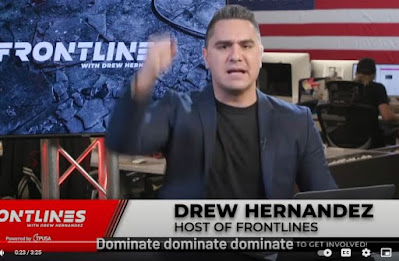 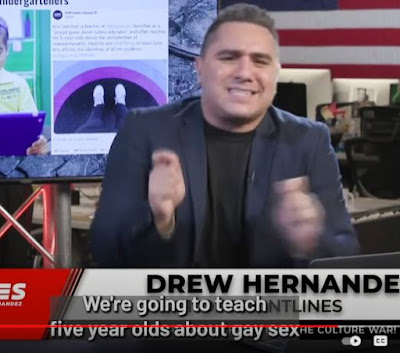 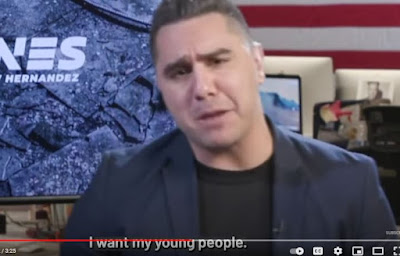 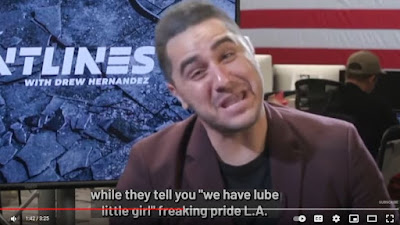 Editor's note - This is a special post because when I first saw the video, I had to post something about it. After read it, feel free to read  Did Libs of TikTok help set stage for white supremacist attempt to disrupt Pride event?, which was supposed to be tonight's only post before this guy showed up.

The host of Turning Point USA’s daily show Frontlines, Drew Hernandez, has spent the first half of June targeting the LGBTQ community and Pride Month, referring to it as “groomer month” and calling LGBTQ people “mentally ill.” Publishing videos to TPUSA’s half a million-plus YouTube subscribers, Hernandez has called for parents who bring their children to Pride events to be arrested.

This video is like watching the camp classic Mommie Dearest.  You try not to laugh but its so ridiculous that you simply cannot help yourself. Hernandez's desire to scapegoat LGBTQ people as 'groomers' borders on obsession.  It's downright spooky.
Posted by BlackTsunami at 8:56 AM No comments: