Jason Collins comes out - the good, the bad, and the ugly (i.e the religious right) 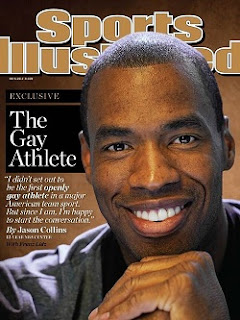 In case you have been living in cave with your fingers in your ears, 12 year NBA veteran Jason Collins became the first openly active gay man in sports.

Now this story caught me flatfooted because I had two exclusives today. So I think it's better for me to give a news briefs recap just in case you couldn't catch all of the news - and there was a lot of it today - about Collins' landmark decision:

The Good - Collins has gotten a lot of support, which he richly deserves

Jason Collins Says 'I'm Gay' in the NBA: Why This Is Huge

First Lady has Jason Collins' back


The Bad - You know there is always someone trying to speak God or attempting to be snarky (and failing miserably) when these situations happen:

And THEN there is the ugly, which is another way of saying the religious right. That leads me to ask a basic question. If these people detest homosexuality so much, then why are they always showing their asses:

Fischer: No NBA Team Should Sign Jason Collins Because He Will Be 'Eyeballing' Players in the Shower

Posted by BlackTsunami at 2:46 PM 4 comments:


The above video is the latest monstrosity from the group Faith2Action and Janet Porter (the entities behind several other ridiculously homophobic videos).  It's the usual nonsense about how gays supposedly want to "silence" Christians and harm children.

I would have yawned and let it go by except for one vicious lie in it. At 1:02, the narrator - Folger - zeroed in on the Southern Poverty Law Center. Folger and other members of the religious right have been angry at SPLC ever since the organization designated several anti-gay organizations as hate groups due to their deliberate spread of untrue propaganda about the lgbt community.

Folger claims that SPLC published the personal information and address of Concerned Women for America's president Peggy Nance and invited people to "visit" her. Folger then connects this claim to last year's shooting at the Family Research Council headquarters.

But this is a lie. SPLC has never published Nance's personal information or address. I know that SPLC would have never stooped to such a tasteless and dangerous tactic. And I confirmed this via an email this morning with Mark Potok, SPLC spokesman and director of publications and information.

The shooting last year at FRC headquarters was awful and I am thankful that no one was seriously hurt. However, the attempt by Folger and other members of the religious right (particularly the Family Research Council itself) to exploit the shooting is simply nauseating.

At what point will people say enough?

Posted by BlackTsunami at 9:01 AM 3 comments:

The above story has been playing huge in religious right and conservative circles lately.  The story, which not only includes the tale of a forced lesbian kiss but also boys being told to carry condoms in their pockets, has been the talk of several conservative sites from Free Republic to The American Thinker to World Net Daily. The National Organization for Marriage referred to this story in three separate emails last week as an example of what will happen should marriage equality become legal across the country.

According to the school district, during the workshop at Linden Avenue Middle School, no female student was forced to engage in any lesbian kissing, male students were not told to carry condoms, and sexual activity between students was not condoned in any way. The district also said:

During the week of April 9, eighth grade communication sessions were held at Linden Avenue Middle School. These sessions were designed by building leadership and the guidance department. The goals of these sessions were to encourage students to treat one another (and all marginalized groups) with more respect as well as to further develop an appreciation for personal dignity. In response to parental concerns about these sessions Dr. Zahedi, the middle school principal, held an evening informational forum on April 16. This session was well attended and the subsequent feedback has been positive. In addition, the Board of Education and Superintendent of Schools, Paul Finch, addressed the community at the April 24 board meeting on the topic of these sessions. Here again, feedback from the community and students was overwhelmingly positive.


Here is an interesting fact you do need to remember - this story gained steam when it was picked up by Fox News reporter Todd Starnes. While Starnes did cite the area newspaper,  The Poughkeepsie Journal, in his post, he choose to add more lurid detail about the alleged lesbian kiss. Also, while The Journal talked about the entire workshop as a whole, Starnes chose to take the "they didn't even notify the parents" route, thereby playing up a semantical tone that the school was trying to "indoctrinate" students.

On Monday of last week, the district sent Starnes an email asking that he update his story with correct information.  It is not known whether or not Starnes chose to update his story but now the school district has to deal with what it calls "hostile and hateful emails" from many who don't even live in the area. It puts the blame for this solely on Starnes and the organizations - such as NOM - who chose to repeat Starnes' "inaccurate" story.

My guess is that Starnes had already made up his mind what the "true story" about the workshop was once he heard of the alleged lesbian kiss and condoms.

According to Equality Matters as the "culture reporter" for Fox News, Starnes uses his role as a mouthpiece to not only funnel information from several anti-gay groups, but also to push anti-gay information into the mainstream. Equality Matters points out several other incidents in which Starnes has made it a point to report stories which "depict LGBT equality as a threat to religious and personal freedom."

In the case of the Red Hook School District, the only threat was most likely Starnes himself. A reporter on a crusade to push a point of view instead of the facts is always dangerous.