The saddest anti-gay letter you will ever read

Police detective Kat Cooper was in the news earlier this year because of an ugly incident which took place regarding her family. Her family was asked to leave their Tennessee church because she helped to pass legislation which would give benefits to same-sex couples in her town.

Now comes something a bit more alarming and almost amusing if it weren't so disturbing. She received the following very nasty letter which she posted on her facebook page: 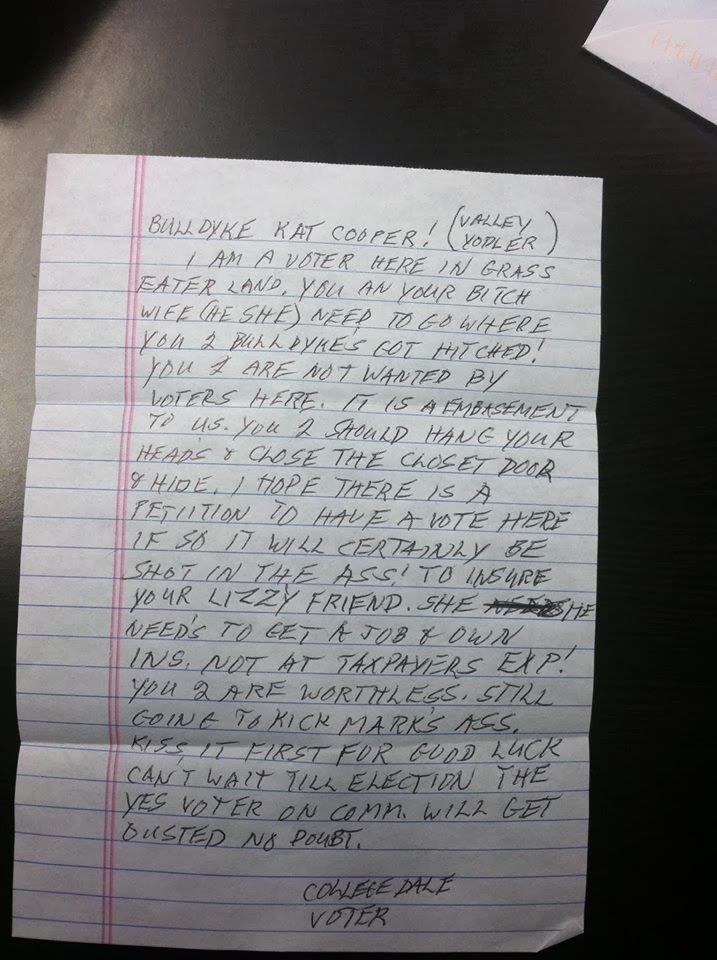 Oh Lawd, did the writer say he/she is in college?

UPDATE - A commentator just informed me that the writer isn't saying that he/she is in college. Collegedale is actually the name of a city in Tennessee, which to me is even more embarrassing. For the city that is.

Hat tip to the Huffington Post.
Posted by BlackTsunami at 2:38 PM 6 comments:

Newly Uncovered Documents Expose ALEC's Anti-Gay Past - Decades before pushing those awful "Stand Your Ground" laws and restrictions to voting rights, ALEC was pushing extremely homophobic nonsense like such:

ALEC classified all gay people into six categories: “the blatant, the secret lifer, the desperate, the adjusted, the bisexual and the situational.” The “blatant” gay person was "obvious and ‘limp-wristed’” . . . . Yet no matter what category a gay person fell into, ALEC argued, the most dominant practice within “the homosexual world is pedophilia, the fetish for young children.” This tendency, the group claimed, was the product of the fact that “the homosexual cannot reproduce themselves biologically, so they must recruit the young.”


Ah yes. No homophobic propaganda is complete without an inference to the following image, the constant lying monkey on the back of lgbt equality: 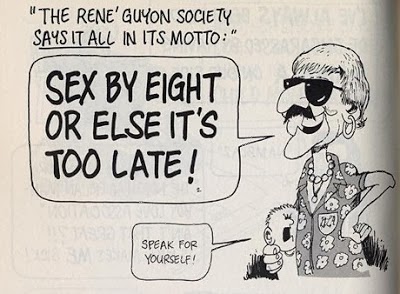 How Junk Science and Anti-Lesbian Prejudice Got Four Women Sent to Prison for More than a Decade - And this is one of the end results of people believing the above crap.

Meet Alliance Defending Freedom, Fox's Favorite Anti-LGBT Legal Organization - A major news network (even if it is Fox) giving an anti-gay group an unrestricted and unchallenged forum is going to spell worse problems for our community. Trust me on this one.

Rep. Karen Clark plans to introduce bill banning ex-gay therapy - And this is Minnesota. What would Marcus Bachmann think?

Dick Cheney Was 'Surprised' By 'Attack' On Liz Cheney Over Anti-Gay Marriage Stance - This is giving me flashbacks to childhood when sibling friends of mine would fight so viciously that their parents had to break it up. What did I say back then? "OOOOOOOO! Somebody's gonna get it!!"
Posted by BlackTsunami at 8:59 AM 1 comment: