A primary win by a  pastor in North Carolina should catch the attention of the LGBTQ community.

Incumbents are typically favored in American elections, but that didn’t save GOP politician Rep. Robert Pittenger from his primary challenger, the anti-gay pastor Mark Harris last night. The surprise upset puts Harris, who helped lead the fight to ban same-sex marriage in North Carolina, against Democrat and Marine Corps veteran Dan McCready. It also puts a somewhat reliable Republican seat into a toss-up.

. . . Harris isn’t just a pastor; he is a fiercely anti-LGBTQ activist known for opposing civil rights and claiming that being gay is a choice. He is best known as a point man for a state amendment to ban same-sex marriages that was ultimately found unconstitutional. More recently, he led forces to repeal protections in Charlotte for gay, lesbian, bisexual and transgender individuals.

A former blogging compadre of  mine, Jeremy Hooper, has a long file on Harris from when he covered the 2012 NC marriage equality vote. The following audio of Harris denigrating marriage equality and the LGBTQ community (in the name of religion, of course) is all you need to hear to know that if this man went to Congress, life for us would become more difficult. It's bad enough that the anti-LGBTQ industry already has much of Trump's attention and a hand in developing policies. Just think of how much more anti-gay havoc Harris would help them cause.

Posted by BlackTsunami at 3:39 PM No comments:

'LGBTQ community does well in primaries, now on to November' & other Wed midday news briefs 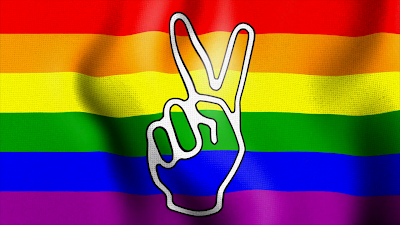 Primaries were held for last night and the winners will move on to November. For all of you "proper peoples" and concern trolls bellyaching about the LGBTQ community being in danger of being one issue voters, go straight to hell. While we should have a diverse desire when it comes to our voting choices, there is nothing wrong with us wanting to get our own elected or at the very least getting pro-LGBTQ candidates elected.  It's time we started being just a tad bit more selfish in that regard.

Antonio Wins Ohio Senate Primary; 10 LGBTQ Candidates Move on to November - LGBTQ candidates and allies were highly successful in Ohio. One of the winners, Rick Neal, has the potential to be Ohio's first gay Congressman. And Nickie Antonio just became the first LGBTQ to serve in the Ohio state senate.

Family name helps Pence brother win GOP bid for House seat - That nauseating Mike Pence has a brother and he just won the GOP nomination for the Congressional seat which Pence once held.

A Gay Marriage Opponent Just Ousted A GOP Incumbent in North Carolina - And a pastor who wants to vote for judges who would overturn the marriage equality decision won the GOP nomination for Congress. The Democrats got a former Marine running against him.

And according to HRC, these pro-equality candidates won their primaries:

Grenell admonishes Germany on Iran deal in first week as ambassador - Trump appoints a gay ambassador, which the religious right doesn't raise even a word of complaint about. This is why. It is also why he was opposed by various LGBTQ organizations.

Trump’s Ambassador to Germany Stokes Furor Over Iran Just One Day Into Job - More about the above news brief.
Posted by BlackTsunami at 9:24 AM No comments: