The Family Research Council is not happy with the recent decision by Target to help a pro-gay adoption organization (the Family Equality Council) raise money to defeat an anti-gay bill in Minnesota by selling t-shirts.

And as the organization always does, FRC is displaying its displeasure through basic lies via the following handout: 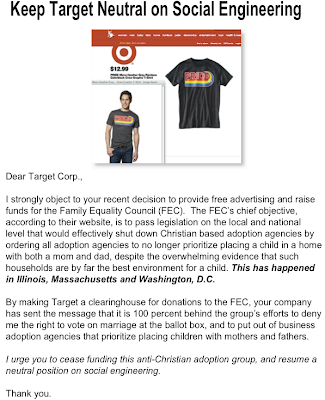 So according to FRC, Target is aiding and abetting the shutting down of Christian adoption agencies if they sell t-shirts helping to stop the anti-marriage equality in Minnesota and this will "harm" children and the so-called cause of "religious liberty."

Not only is this a lie, but it is a lie which has already been shot down.

In January of this year, former presidential candidate Newt Gingrich conducted an interview on CNN where he made the exact same charges about gay adoption in general (i.e. that it would harm children by forcing Catholic adoption agencies to shut down):

SOLEDAD O’BRIEN (HOST): You were talking about gay adoption and you said that the church, the Catholic Church, was forced to close its adoption centers. Isn’t what really happened that, if the church decided it was going to continue to take federal funds and have access to those foster children, that they couldn’t continue to discriminate against gay couples who wanted to adopt?

O’BRIEN: They weren’t really forced to close, they made the decision.

GINGRICH: No, no. They were forced to close because you’re saying to a religious group “give up your religion.” That’s absurd. The idea that the state would impose its secular values on a religious organization is an absurdity.

GINGRICH: No, no, in Massachusetts–

O’BRIEN: You can do whatever you want but if you want funding.

GINGRICH: No, that’s not true. That’s not true. There are states now, including the District of Columbia, which essentially adopt laws that say you can’t offer an adoption service unless you meet the secular standards of the state. They are in effect saying the secular standards of the state are more important than religious freedom. I think it is inherently anti-Christian and anti-Jewish. It is in favor of a secular model, that I think is wrong. And I think that it’s wrong for the government to impose its values on religion. That’s the whole point of the First Amendment, is to not have the government imposing values on religion. [CNN, Starting Point, 1/10/12]

Mr. Gingrich’s comments are patently false and inherently anti-family.  The decision to end public adoption services in Massachusetts and the District of Columbia was made by Catholic Charities alone. They wanted to continue to receive public funding without adhering to the law and when the state refused to make an exception for them they balked at providing critical social services to youth.

His comments are a distraction at a time when we should be focused on the best interests of children and finding them loving and permanent homes. [Jennifer Chrisler Email, 1/10/12, emphasis added]

So here’s a little reality check. Catholic Charities of Boston was not forced out of the adoption business because of marriage equality in Massachusetts. The organization voluntarily ceased doing adoptions after the state’s four Catholic Bishops got wind that gay parents had been adopting kids through Catholic Charities from an October 2005 Boston Globe story. Not surprisingly, all of this happened as the Massachusetts Legislature was wrestling with whether to put an anti-gay marriage amendment on the statewide ballot, which the local Catholic hierarchy supported wholeheartedly. […]

Catholic Charities was accepting state funds to provide adoption services and was thus bound by the state’s gay-inclusive anti-discrimination law not to reject qualified adoptive parents based on sexual orientation. Oh, and by the way, the non-discrimination law has been on the books since 1989—long before marriage equality was but a doodle on Mary Bonauto’s legal pad. [GLAD.org, 3/10/11, emphasis original]

Catholic Adoption Agencies Can Still Choose To Discriminate Against Same-Sex Couples In Private Adoption Services. Steve Major, director of communications for the Family Equality Council, wrote in an email to Equality Matters:

Catholic Charities facilitates relatively few public adoptions nationwide. In areas where they’ve declined to comply with existing non-discrimination rules and stopped doing public placements (Massachusetts, D.C., parts of California – and will be the likely result in IL where the issue is still working its way through the state courts) there has been little to no impact on the state’s ability to place children. Other adoption agencies have agreed to step in and continue the work of finding children their forever families.

Catholic Charities and other religiously affiliated organizations who receive public funding should be obligated to follow the same non-discrimination laws that other agencies adhere to.  If they place their own religious objections ahead of the law and the best interests of kids, they should withdraw from conducting public adoptions. They are free to continue facilitating private adoptions. [Steve Major Email, 9/9/11, emphasis added]

After the courts said no, the Illinois Catholic Charities gave up its fight.

So all in all, by helping the Equality Family Council, Target is not harming children nor the so-called cause of "religious liberty."

But by lying about the situation, the Family Research Council is doing a lot of damage to the cause of Christianity.

Posted by BlackTsunami at 1:11 PM 3 comments:

Black Leaders and Gay Advocates March in Step - Some good news for Monday.

Minnesota State Board: Anti-LGBT Group May Exploit Loophole To Evade Disclosure - Ugh. A NOM affiliated group in Minnesota could have an out to keep from disclosing its financial sources.

Hold the Judgment: Changing Attitudes on LGBT Issues Defy Religious Stereotypes - A post like this is needed in our community.

Who cares if the National Organization for Marriage may have broken the law?

The National Organization for Marriage hasn't said a word about being investigated by the state of California since the news broke last week.

But other folks are and they aren't exactly helpful:

A Republican leader says an openly homosexual presidential candidate is just being "a sore loser" in attempting to attack California's man-woman marriage battle.

California's Fair Political Practices Commission (FPPC) is investigating whether the National Organization for Marriage failed to report donations made to Proposition 8. Republican Fred Karger, whose website bills him as "the first openly gay presidential candidate from a major political party in American history," asked the Commission to look into whether the "Yes on 8" campaign failed to reveal almost $400,000 it received in 2008, including $10,000 from presidential candidate Mitt Romney's Alabama super PAC.

"Let's say for the sake of argument that Mitt Romney's super PAC contributed to Prop. 8. What's wrong with it?" asks Celeste Greig, president of the California Republican Assembly (CRA). "It was a valid proposition that the people overwhelmingly supported."

In addition, to the Romney money there were 10 more contributions NOM did not report, including: $150,000 from Michael Casey of Jamestown, RI, $100,000 from Sean Fiedler of New York, NY and $25,000 from NOM Board member Craig Cardon of Mesa, AZ, a General Authority in the Church of Jesus Christ of Latter-day Saints.

So it is a pretty big deal.

Attacking Karger is merely killing the messenger. If Greig was concerned about preserving the laws in her state, she would lay off of Karger and start asking questions about NOM.

Posted by BlackTsunami at 7:04 AM 5 comments: