How far will the religious right take the 'religious liberty' argument?

An incident took place in Illinois recently which illustrates how dangerous this religious liberty card that the religious right pushes can be so dangerous:

A same-sex couple from Davenport, Iowa says they were banned from possibly renting a Moline, Illinois reception hall because they are gay.

The manager of the University Club in downtown Moline confirms she refused to let the couple see or rent the space for a reception because of her religious beliefs.

Taylor Shumaker says she called the University Club on Tuesday, June 19, 2012 to inquire about the place. She says bar manager Kristen Stewart offered to give Shumaker a tour and asked if her fiance would be coming.

. . . In a phone interview with WQAD, Stewart says it is all true, and defended her right to refusal.

But there is a problem with this. Stewart was the manager. She is not the owner of the hall.

It's my sad duty to report that on this day in 1988, the lgbtq community lost a warrior whose fight against injustice paved the way for gays and lesbians to serve openly in the military - Leonard Matlovich.

He was the first gay man to demand his rightful place in the military. Before anyone even thinks of saying "thank you" to President Obama for the legislation allowing us to serve openly, they should say "Thank You Leonard" several times.

Six weeks after telling a rain-drenched Sacramento gay rights rally that, “Our mission is to reach out and teach people to love and not to hate,” a year after being arrested in front of the White House protesting President Reagan's virtual passive genocide, more than a decade after telling his African-American Air Force supervisor that his letter outing himself meant, “Brown v. the Board of Education,” and twenty years after surviving a land mine explosion in Vietnam, AIDS' great black wings swept Leonard's last breath away beneath a large framed photo of Martin Luther King, Jr, at approximately 9:43 pm. On one side of his bed, holding one hand, was his roommate, Joe, a nurse cousin, and myself; on the other side, holding his other hand, his heartbroken mother still trying, like so many mothers during those relentless dark days, to fathom how she had outlived her son; and his father, the stoic conservative who, before retiring after 30 years in the military himself, had stood by his then 19-yr. boy as he was sworn in. Thirteen years before this day he’d opened the morning newspaper and found out for the first time that his son was gay . . . and that he was threatening to sue the United States Air Force for discharging him. He then locked himself in his bedroom, and cried for two hours. As he looked down now at the shriveled body finally at peace, his inconsolable grief gently rested against the shoulder of his immeasurable pride.

Read more »
Posted by BlackTsunami at 2:55 PM No comments:

NOM Is Worried About The ‘Sanctity’ Of Gay Comic Book Weddings - And soon, Maggie Gallagher will be announcing a parternship with Dr. Doom and the Red Skull on the situation. Watch out Doom and Skull. NOM will turn on you.

Marriage Equality: LGBT Religious Leaders Speak Out On The Spiritual Value Of Gay Marriage - Yet another nail in the coffin of the mindset that the lgbt and religious communities are separate entities forever at war with each other.

New Lesbian Parenting Study Debunks ‘Fatherless’ Male Role Model Concerns - Now there is a much better study on the matter.

Posted by BlackTsunami at 8:57 AM 2 comments:

Rabid anti-gay spokesman and hate group leader Peter LaBarbera has partly returned to the very thing which made him infamous - snapping pictures of gays and lesbians allegedly doing "naughty things" and posting them on his webpage as proof of the so-called gay agenda to harm children and corrupt values.

He hadn't done this in a while because of much deserved derision he received from all sides of the argument over gay equality (conservative and liberal) over his tendency to attend subcultural events such as leather festivals and take pictures of gays allegedly indulging in all sorts of lurid behaviors while ignoring the heterosexuals also in attendance.

So apparently LaBabera pulled back from this sort of thing for a while. Now, however, he has returned with a new bent. Supposedly, he attended Philadelphia’s Gay Pride Parade and “PrideDay”festival Sunday, June 10, 2012 and observed all sorts of interesting things there.

Sadomasochist man in a gown of sorts marches along 7th Street in Philadelphia carrying "Leather Pride" black-and-blue flag. The man to his left is carrying a "Bear Pride" flag. "Bear" is slang for heavier, hairy homosexual men.

Sounds freaky, doesn't it? But check out the photo and ask yourself, does it really match the words: 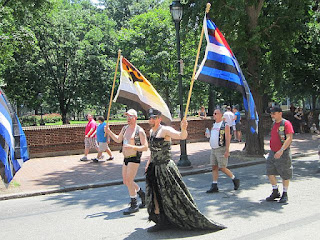 It's a man in a homemade camouflage dress and while I doubt it would be a huge hit at the Oscars, it's hardly brings up images of whips, chains, and candle wax on the nipples.

And then there is what I like to call the bait and switch photo: 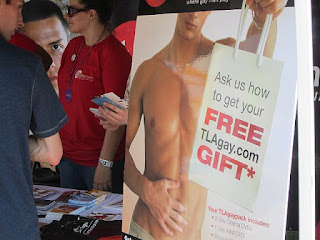 LaBabera says this about TLA:

I don't know the truth about what LaBarbera is claiming (it's interesting that he doesn't even take a picture of the so-called goodie bag), I do know that TLA sells other things besides pornographic movies. The company also sells mainstream movies and gay themed regular movies.

What a pity that we don't know what was actually on TLA's table during the festival because LaBarbera didn't post any pictures of that either. How convenient.

LaBarbera may have actually struck some type of gold with this next photo: 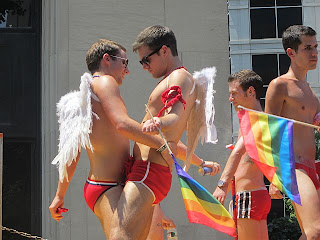 He said the following:

Go-go boys grind to the music on a float in the Philly homosexual "Pride" parade. Young children both participated in the same parade and watched it from the side streets.

A photo taken of two men dancing can reveal a lot of things, but then it can also give a pretty false image. I don't see anything wrong with it, but I find it interesting that LaBarbera was so shocked by these men dancing that he chose to post two pictures of it. I wonder just how many pictures of these two men dancing did he take?

Now I won't post the last photo because it is extremely lurid. You can see it on LaBarbera webpage (and when you see it, you will know what I'm talking about), however, based upon his description of it, the subject in question may not have been a part of the festival:

The large poster drawing of a naked man wearing a condom was visible from afar at the Penn’s Landing ‘Pride” festival. There was NO warning at this booth that it was off-limits to children, but even if there was, young children would still see this inappropriate poster.

Surely there must be another leather festival somewhere.

Posted by BlackTsunami at 4:56 AM 5 comments: