Whenever you have time, please check out this very awesome episode of NoMoreDownLow.TV

It serves as a reminder that, in spite of the spin by those on the right, marriage equality is also an African-American issue.

Posted by BlackTsunami at 3:00 PM No comments:

Straight Man Who ‘Appeared Gay’ Not Allowed To Give Blood - Well this is a first.

Andrew Sullivan and Cynthia Nixon on what marriage means - Not one for making it about celebrities here, but both posts are excellent.

Posted by BlackTsunami at 8:47 AM No comments: 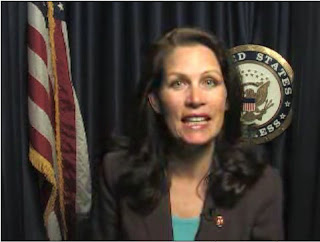 Michele Bachmann recently accused President Obama of having chutzpah (mispronouncing the word which means lack of shame in some circles). However, based on a recent fundraising letter, perhaps she should look in the mirror.

In the email - sent to me by a friend from Pam's House Blend - Bachmann actually had the nerve to attack recent comments made by The View's Whoopi Goldberg as a way to pump her base for money:

Looks like the Democrats have sounded their alarms in Hollywood. Donate

The Hollywood elite have been on the attack this week, falsely berating our campaign for President and our supporters.

On Tuesday, while on The View, Whoopi Goldberg spewed senseless accusations aimed at our campaign. Her comments were not only incorrect, but wrongly attacked my stance on single parents. As the daughter of a single parent, I learned firsthand the difficulties of growing up with one parent. However, it was from my strong and independent mother I learned when the going gets tough, the tough get going.

I am proud of my record and I refuse to allow liberals like Whoopi Goldberg to bully our campaign. This is yet another example of how the liberal Democrat establishment has put a target on my campaign for defeat. They'll say and do anything. The comments from Whoopi Goldberg have hit a new low and I must have the resources to defend myself and fight back.

Liberals across the country believe if they defeat our campaign, the Tea Party movement will be eliminated. I need your support to defend myself and our shared constitutional values right away.

I won't back down and today, I need to know you stand with me. To accomplish my goal of $40,000 in 24 hours, I'm relying on friends and supporters like you to step up to the plate to help me today. Please follow this secure link to make your donation of $25, $35, $50 or more.

I'm reaching out to you for help because the liberal media credits me with being an undaunted conservative who routinely leads the opposition to President Obama. That's why the radical supporters of President Obama's agenda are so committed to defeating me.

The Hollywood liberals believe if they attack my campaign, they have a shot at defeating me and dismantling the Tea Party movement. Your immediate donation will send a strong message to Hollywood, that we are not going anywhere. That's why any amount you can donate to my campaign today - up to the $2,500 legal limit - is appreciated.

I look forward to your immediate response and I thank you once more for your friendship and support.

P.S. As the big name liberals continue to come out of the woodwork to attack our campaign, I need your support. I ask that you make a generous donation of any amount you can afford to help me fight back against the millions of dollars liberals are flooding into Obama’s bank account. Can I count on your donation of $25, $50, $100 or even $250 today? Your support - no matter the size - makes a big difference. Please follow this link to make a donation today. Thank you

If that's not good enough for you, then you go to the page where you will be treated to not only the same plea but a photo of President Obama kissing Goldberg on the cheek.

Bachmann is referring to Goldberg calling into question her signing the Marriage Vow, a pledge put together by the Family Leader, an Iowa conservative group. Bachmann came under fire for signing this pledge, mostly because of an inaccurate passage which said African-American families benefited from slavery because supposedly more black children were born from two-parent households during that time.

Goldberg specifically went after the pledge for that point, calling for folks to stop bashing single-parent households and to also stop giving opinions on subjects they know nothing about.

Of course Bachmann claimed that she did not endorse the part about slavery. However, she also admitted that she never read the pledge.

Bachmann's fundraising letter, however, pushes the controversy to a new point and gives a very good clue about her ability to raise money.

The answer is quite simple.

Bachmann is a hateful monster in a skirt who will manipulate the ignorance of people to further her own political ambitions.

Or to put it another way, Bachmann is a demagogue. A demagogue is defined as a political leader who seeks support by appealing to popular desires and prejudices rather than by using rational argument.

This is Bachmann to a tee. She doesn't challenge people to think or find solutions to their problems. She gives them excuses to either hate, fear, or egotistically put themselves above others.

And when caught in a contradiction or lie, she doesn't apologize. She parries. She points the finger of blame at others. "The liberals are out to get me," she tells her followers, "because they hate YOU."

In Bachmann-land, Goldberg attacked her not because she was dumb enough - or rather uncaring enough -  to sign some ignorant pledge which actually praised slavery, but Goldberg is a part of the "conspiracy by liberals to harm America."

And people are either criticizing or laughing at her campaign not because of her basic disregard for facts, but because it's a part of the "conspiracy by liberals to harm America."

While folks laugh at Bachmann's supposed cluelessness, she is doing some laughing herself as she goes to the bank and on the talk shows. Or as her name is mentioned in the media countless times, thereby giving her some type of leadership status.

To me, that simple fact makes Bachmann nothing to laugh about but something to cry about simply because she is a perfect example of how this folks in this country never seem to learn the hard lessons which come from enabling past demagogues.

And how easily some of us will anoint as a leader any manipulative monster who utters the phrase "my faith" or the words "Jesus" and "God" as practically every fifth word of their speech.

Posted by BlackTsunami at 6:00 AM 4 comments: