'Fox News: Rush Limbaugh getting Medal of Freedom is same as when Ellen Degeneres received it' & other Fri midday news briefs

Laura Ingraham lies that affirming trans students is “child abuse,” will lead to lower age of consent - I weep when I think of the people who have their own shows to spew lies and propaganda.

Pinelands Regional parents get first look at new LGBTQ lessons their kids will learn - This is the proper route. Let parents see the lessons and become informed. That would cut down on how the anti-LGBTQ industry attempts to inspire fear.

Christian couple rejected as foster parents because they’d send a gay kid to conversion therapy - I'm sorry but this is necessary. The couple later said that they are willing to foster heterosexual children, but you see, that's not good enough. What about the LGBTQ children who are afraid to come out. What would they do if a child they fostered came out? Would they send the child to that awful therapy?
Posted by BlackTsunami at 5:07 PM No comments: 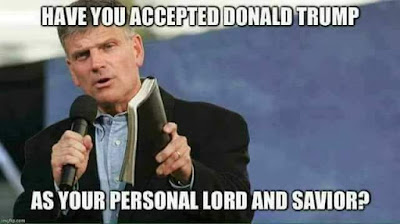 Franklin "Christian businesses shouldn't be forced to service the LGBTQ community"  Graham just got a taste of what it's like to be refused service and he doesn't like it. In fact, he is talking about suing.

From the awful right-wing Charisma News by way of JoeMyGod:

After facing discrimination in the U.K. because of his biblical beliefs, a spokesman for Franklin Graham tells CBN News that the Billy Graham Evangelistic Association (BGEA) has have decided to fight in court for its religious rights there.

"Since the original venues have broken our legal contract with them, we are pursuing appropriate actions based on grounds of religious discrimination and freedom of speech. The gospel always faces opposition, so we will prayerfully and boldly continue to press forward so that the Good News of God's love and forgiveness will be proclaimed in all of the cities we have planned to visit," the BGEA spokesman told CBN News.

The statement comes after another city in the U.K. has rejected an appearance by Graham to preach the gospel because of his views on homosexuality. However, this has not deterred the evangelist, who's still looking forward to his eight-city tour of the country.