On Saturday, Florida State Rep. John Snyder sent out a tweet accusing kids' channel Nickelodeon of  "pushing gender identity and sexual orientation on channel because one of its shows included a rainbow: 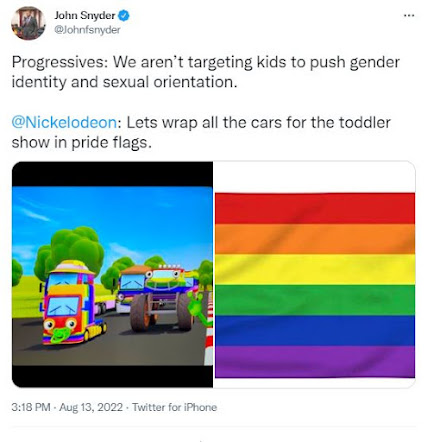 In almost no time at all, the responses figuratively dragged him from one end of Twitter to another as folks loudly and very vigorously called out his bigotry. And it's something we need to do more of when people like Snyder pull the "they are grooming kids" card when it comes to LGBTQ people and things which support our basic visibility - embarrass them by pointing out the unrestrained hysteria of their homophobia and transphobia
But enough of that. Bring on the humiliation because the twitter responses were a massacre:
Read more »
Posted by BlackTsunami at 4:43 PM No comments: