Know Your LGBT History - The story of 3 minutes

The recent news that a professional wrestler was caught on camera screaming anti-gay slurs during a television taping neither shocked nor upset me because I chalked it up to a publicity stunt.

Those of us who watch pro wrestling are aware that for years, the lgbt community has served as fodder for storylines rich with stereotypes. I already covered two - The Exotic Adrian Street and the late Adorable Adrian Adonis.

However, the Story of 3 Minutes has to be the most offensively bizarre and bizarrely offensive gay storyline ever in the history of wrestling.  The Story of 3 Minutes began with an interrupted gay wedding, moved towards something called Hot Lesbian Action, and culminated with a man getting a massive rear jammed in his face.

It began with this World Wrestling Entertainment tag team, Chuck and Billy: 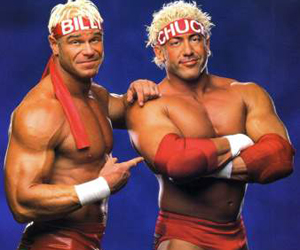 Via a storyline in 2002, the two wrestlers fell in love and decided to have a commitment ceremony live in television.  During the ceremony, the wrestlers admitted that it was merely a publicity stunt which wen too far. That's when the story really got strange. Allow the recap to tell the story:


Billy & Chuck with Stephanie McMahon vs... by Jokerwilds

One wonders what would have happened had the lgbt community had the power of the internet which we do now.

Read more »
Posted by BlackTsunami at 3:49 PM No comments:

Husband Threatens Custody Suit After Ex-wife Befriends 'Known Homosexual' - THIS is a unmitigated mess. A man is threatening to sue for sole custody because his ex-wife has (wait for it) a gay man for her friend. That's it. Nothing more.

GOP Chairman Tries To Appeal To Gay Voters By Bragging About His ‘Great Marriage’ - Uh how about pushing for US to have great marriages. That could help.

ENDA under review prior to April reintroduction - ENDA is coming. The question is are WE ready for it?

This weekend: FRC promotes NOM's March for Marriage by telling congregants gays aren't going to heaven- It's junk like this which destroys people's faith in God. Don't fall for it. When someone throws the Good Book at you, ALWAYS consult the original author. He always tells you a different story.

Why The ‘Ex-Gay’ Industry Is Going Under - Cause they are liars.

Posted by BlackTsunami at 8:48 AM No comments:

On the basis of this comprehensive review of the literature regarding the development and adjustment of children whose parents are the same gender, as well as the existing evidence for the legal, social, and health beneﬁts of marriage to children, the AAP concludes that it is in the best interests of children that they be able to partake in the security of permanent nurturing and care that comes with the civil marriage of their parents,without regard to their parents’ gender or sexual orientation.

Marriage equality can help reduce social stigma faced by lesbian and gay parents and their children, thereby enhancing social stability, acceptance, and support. Children who are raised by married parents beneﬁt from the social and legal status that civil marriage conveys to their parents.


The organization also took the time to denounce the infamous Mark Regnerus study. Naturally religious right groups are going out of their head to denounce AAP for this.

The National Organization for Marriage - which has no expertise in pediatrics - said the following:

The AAP has not conducted any new research to justify their preposterous conclusion, adding evidence that it is a political act, not a scientific one. Instead, they have reviewed a series of studies produced by gay children. As was reported by respected Louisiana State University researcher Loren Marks, virtually every study to date has involved small samples and hand-selected participants. None of them utilize large-sample, randomly selected participants — a key requirement to rigorous research.

One recent large-scale random sample study that has been produced by University of Texas researchers found that those raised in a same-sex household fared worse than those raised in intact heterosexual families on two-thirds of outcomes measured. Nowhere in the AAP statement do they address the confounding scientific evidence by Regnerus, Marks, Sirota and Allen — all published in peer-reviewed journals. The AAP simply ignores them.


But NOM is not being truthful. According to Think Progress, the AAP report not only cited studies but also debunked the Regnerus study:

The full report cites dozens of studies about same-sex parenting and even takes time to debunk the politically manipulated Regnerus study for not actually assessing data on committed same-sex couples raising children.


Now the Family Research Council, in complaining about the AAP statement, took a different road. The group not only cited the debunked Regnerus study, but  also another medical association who had an opposite opinion of the AAP. This medical association is the American College of Pediatricians and its statement said in part:

“The College does not support the alteration of this time-honored and proven standard to conform to pressures from “politically correct” groups. No one concerned with the well-being of children can reasonably ignore the evidence for maintaining the current standard, nor can they or we ignore the equally strong evidence that harm to children can result if the current standards are rejected,” says Den Trumbull, MD, President of the American College of Pediatricians. “The AAP ignores generations of evidence of health risks to children in advocating for the legality and legitimacy of same-sex marriage and child-rearing.”


First of all, you should know that the American College of Pediatricians is not a legitimate medical association. It is actually a shell-group whose purpose is to give anti-gay distortions a degree of credibility. In fact, the report link in the words "evidence of health risks,  Homosexual Parenting: Is it Time for Change? is a piece I refuted years ago. The report contained outdated and cherry-picked studies. Editor's note - the report seems to have been updated, adding new information such as the Regnerus study, but seeing how the Regnerus study has been discredited, it changes nothing.

In addition, three years ago, the American College of Pediatricians attempted to introduce a brochure in several high schools which made wild, inaccurate accusations about the gay community, including:

3. Homosexuality is just a changeable condition.

So no one, except the religious right and their supporters, actually takes the American College of Pediatricians seriously.

But it does illustrate one annoying point about the religious right. When the truth contradicts their claims, they simply attempt to create a new truth.

Posted by BlackTsunami at 4:44 AM 9 comments: