Conservatives label LGBTQ suicide hotline as pedophilia, get brutally dragged all over Twitter for the lie

The entities accusing LGBTQ people of grooming children have focused on a new target. And they are finding out there is such thing as doing too much.

Conservatives have spent the last couple months calling everyone who disagrees with them a pedophile, and now they’re setting their sights on the Trevor Project, an organization that runs a hotline and other resources to fight LGBTQ youth suicide.

As per their standard operating procedure, many of them have taken one factoid and amplified it to their supporters on Twitter. 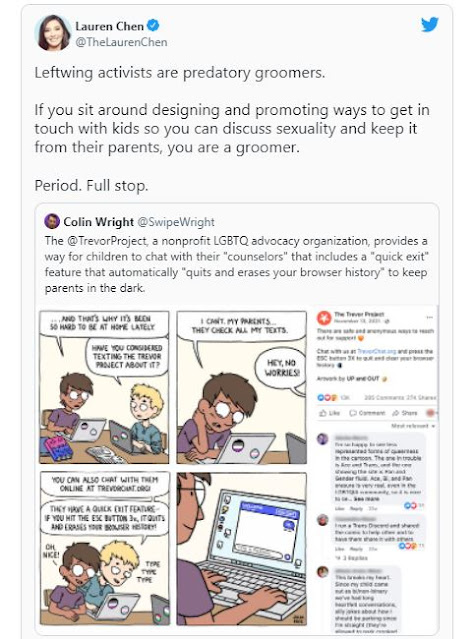 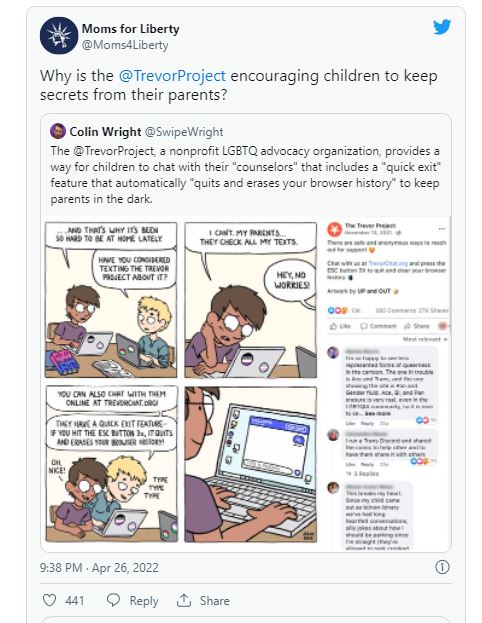 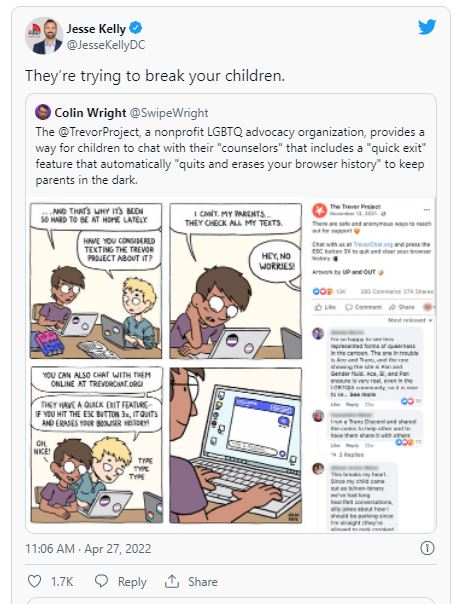 This is a part of a nationwide trend by conservatives and the religious right to brand everything pro-LGBTQ as an attempt to sexually groom children. This attack on the widely acclaimed Trevor Project takes this attack to a new level because conservatives are now saying that  protecting LGBTQ youth from suicide or abuse is actually sexual grooming.
Here is the delicious denouement of it, though. These accusations are getting a loud and brutal pushback. These folks accusing the Trevor Project of 'grooming' children have been dragged on Twitter all day and night with deservedly brutal responses. Here are just a few:
Read more »
Posted by BlackTsunami at 4:45 PM 5 comments:

LGBTQ in Alabama: Students, parents affected by new laws respond in emotional video​ - Telling our stories is how we win.
Literary-themed drag shows in St. Petersburg strike chord over recent LGBTQ issues - Also, do not back down an inch. The folks in this article got that message.
Russian court dissolves country’s main LGBTQ rights organization - Russia is doing what the religious right and their supporters want to do in America. But at a quicker pace.
Anti-LGBTQ+ Russian Propagandist Launches I'm Not Gay Reality Show - Laaaawd! This funny. Not even a little bit.
Posted by BlackTsunami at 9:05 AM No comments: