According to Know Your Meme:


With that in mind, the above video from Lambda Legal is called  'Sh*t Homophobic People Say.' And boy do I wish it were a parody.
Posted by BlackTsunami at 3:09 PM 2 comments:

Let's see if we get this correct. According to NOM, this is exploiting a child: 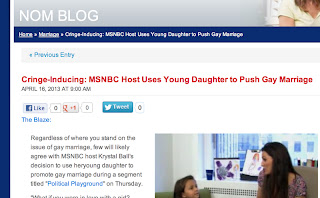 But the image below, taken from NOM's blog, is okay: 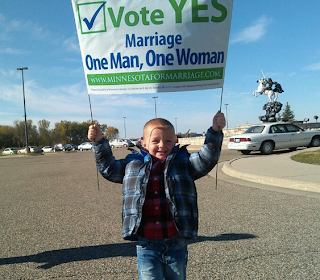 It's so easy when your opposition puts their hypocrisy on center stage. (Hat tip to Jeremy Hooper and SHP1972 on twitter)

Transgender shopper served trespassing papers for bathroom use - There needs to be some SERIOUS education here!

Pat Robertson’s CBN News Blames Anti-Gay Violence in France on Immigrants and Muslims - Apparently in America,  all you need is a lot of money and a bad hairdo for people to listen to any nonsense you peddle.

Fox Nation, Daily Caller Need Guns To Express Concern About Marriage Equality - So they don't want us to marry but they want us to carry guns. Something is seriously out-of-joint here.
Posted by BlackTsunami at 9:01 AM 4 comments:

No doubt the religious right will go into orbit over this but so what. If you allow discrimination based on religious beliefs, where does it stop?

A judge has ruled a Hawaii bed and breakfast violated the law when two women were denied a room because they're gay. The Hawaii First Circuit Court judge ruled in favor of a Southern California couple who sued Aloha Bed & Breakfast for discrimination in 2011, Lambda Legal announced Monday. In 2007, Diane Cervelli and Taeko Bufford tried to book a room at the bed and breakfast because it's in Hawaii Kai, the same east Honolulu neighborhood where the friend they were visiting lived. When Cervelli specified they would need one bed, the owner asked if they were lesbians. Cervelli responded truthfully and the owner said she was uncomfortable having lesbians in her house because of her religious views, the lawsuit said. The bed and breakfast violated the state public accommodations law and is ordered to stop discriminating against same-sex couples, according to the ruling dated April 11. The public accommodations law prohibits establishments that provide lodging to transient guests from discriminating on the basis of sexual orientation, race, color, ancestry, religion, disability and sex —including gender identity or expression.

Posted by BlackTsunami at 4:47 AM 2 comments: