How much of a commentary is it in Hollywood that a graphically violent horror television show features a more normal view of an lgbt relationships than most shows on network television?

Masters of Horror was a show on the Showtime cable network which featured stories directed by various directors. The stories featured various things such as the Iraq War, Native-American legends, serial killers, and cannibals.

To say the least, Masters of Horror was very well-done, but I cannot watch some of those episodes (such as the episode Pelts). They were too violent for even me.

But one of my favorites is called Sick Girl.

Sick Girl, directed by Lucky McKee, told the story of a shy entomologist, i.e. a studier of bugs, Ida Teeter (Angela Bettis) who has absolutely no social life, mainly because of her pet bugs which fill her apartment.

That changes when she meets Misty Falls (Erin Brown), an interesting character who sits in the lobby of her building drawing pictures of fairies all day.

The two hit it off and start dating. However, at the same this relationship starts, Ida receives a mysterious large bug in the mail. The bug escapes and infects Misty, causing a bizarre change of behavior.

Don't worry. At the end of the episode, it will all make sense.

What I liked about this episode is the casual way it presents Ida and Misty's sexual orientation. And the scenes when the two are together in the restaurant are just awesome. Nothing big or spectacular; just normal behavior between two people who like each other but unsure of how to express it.

In the long run, this is what all lgbts want our sexual orientation to be - no big deal and a normal passage of life.

Granted, there is a conflict with Ida's landlady, who, in an ugly scene, accuses the two of looking at her six-year-old grand daughter as fresh meat. She evicts the two, setting up a scene which, in all honesty, despite its graphically violent nature, is most likely what some of us would want to do with homophobes.

A bit of comic relief is provided by Jesse Hlubik, Teeter's oversexed but surprisingly tolerant colleague.

Unfortunately seeing that this is an episode of a horror series, he - like the landlady - is doomed.

Believe it or not, Sick Girl actually has somewhat of a happy ending. And make that heavy on the "somewhat."

The following clips are the trailer and then a little of the initial meeting between Ida and Misty:

The entire episode of Sick Girl is available online. Go here if you want to view it.

Poll: Majority back gay marriage - Time for more "gays are after your children" commercials and flyers, right NOM? The momentum is our side in this. The question is what are we going to do with? 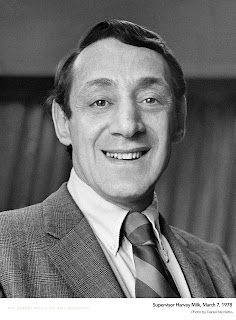 It just sticks in the craw of some members of the religious right that the late lgbt politician, Harvey Milk, is recognized as an American icon.

Over the past couple of days, various members of the religious right have attacked Milk's recognition and maligned his name in an effort to make him into a monster and ruin efforts to give him public recognition.

In 2009, Milk's birthday was declared a state holiday in California. Naturally some fools got upset. Recently, Jerry Cox of the Arkansas Family Council made the erroneous charge that the holiday would force students to hold "mock gay weddings" and "cross dress."

This morning Bryan Camenker of the Massachusetts hate group, Mass Resistance, said that Milk was a child molester.

But an effort which takes the proverbial cake is the following video:

It's all a bunch of tripe.

Harvey Milk was an awesome man. He had fire, spirit, and intelligence.

He taught a generation of lgbts to fight for what should be ours in the first place - our rights as Americans.

Like so many other great figures of American history, he was taken from us too soon (by an assassin's bullet), but his influence continues to reverberate throughout the country.

And no lie or scorning of his reputation will ever take that away.

Posted by BlackTsunami at 4:52 AM 2 comments: