Video games are SO gay

My apologies for the lateness of this post. We had a nasty storm in my area which knocked the power out three times.

And now a look at gay video games from the folks at Infomania. This is hilarious!

A funny look at lgbt villains

A funny look at 'gay' commercials

An interesting and thought-provoking take on lgbt pride

Conversion Therapy - a video with George Rekers in mind

Advice to closeted politicans - How to keep from being exposed

Why the phrase 'No Homo' is highly needed

Why gay marriage is 'wrong'

Posted by BlackTsunami at 4:32 PM No comments: Links to this post

Catholic Church's issue is homosexuality, not pedophilia - This EXTREMELY piss poor attack on the lgbt community by Bill Donohue speaks for itself. He is getting destroyed in the comments section.

A Victory for Clay Greene - a terrible wrong has been addressed and taken care of.

TPM Exclusive: Steele To Hold RNC Event -- Co-Starring Andrew Breitbart - Why oh why should anyone be surprised?

Posted by BlackTsunami at 9:13 AM No comments: Links to this post

Lou Marinelli, the one-time self identified "NOM strategist" and driver of its very, very, VERY unsuccessful marriage tour is now seeking to distance his blog from the organization with a silly disclaimer:


A statement of clarity

I would like to take this opportunity to state that the opinions and statements made in this blog reflect only the opinions of myself, personally, not the National Organization for Marriage.

I am not an employee of the National Organization for Marriage. I am a third party who is directly involved as a partner with the Summer for Marriage.

Therefore, positions I take and statements I make do not reflect the positions or opinions of any other person, entity or the National Organization for Marriage as a whole.

This statement of clarity has been added due to the heavy attention our opponents give to this blog and the great lack of understanding of who or what I represent. Let this stand as a clarification to all.

This disclaimer probably is due to rude and ugly comments Marinelli has made about the lgbt community, which goes counterclockwise to NOM's talking point of unfairly being called bigots simply because it supposedly wants to defend marriage.

Comments like the claiming that the lgbt rights movement is about ""pedophilia, polygamy, and prostitution."

Or an absolutely disrespectful comment he made about a gay couple and their daughter last weekend:

There was one couple (one of those bolder couples who came into the rally itself) who were particularly disappointing. The two men decided not to just attend the rally but they brought a baby with them. Notice I said 'a baby" because it isn't "their baby". It was clearly adopted. They were white the baby was not. 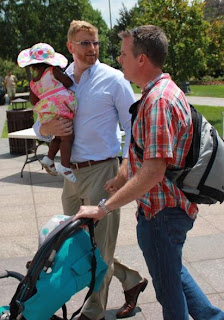 And he includes a picture of the couple he is skewering (complete with their adorable daughter), which does nothing more than push the fact about what a scuzzy thing it was for him to make such a comment - which, by the way, he is getting butchered for in the comments section of his post.

The huge irony about that is Maggie Gallagher made an appearance during NOM's tour and she had this to say:

Hate is not a family value.  The 62 percent of Ohioans who came together across lines of race, creed and color to vote for marriage are not haters, and it’s wrong to portray them, or the American people that way.

Perhaps Gallagher should address those sentiments to Marinelli.

The fact that she most likely didn't but still uses him during NOM's summer tour - which does connect him to the organization no matter how much he tries to backtrack - says a lot about the organization's lack of  basic integrity.

National Organization for Marriage - gays were never hunted down and murdered like 'Jews, Christians, and blacks'

Posted by BlackTsunami at 5:59 AM No comments: Links to this post