Has anyone made a complete pandering fool of themselves in this midterm election more than Arizona GOP governor candidate Kari Lake? And before you answer that question, look at the evidence:

Lake has been attacking the LGBTQ community in her campaign: 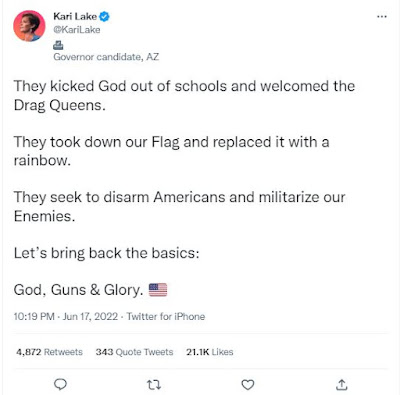 That was before it came out that  she was once good friends with a drag queen:

Richard Stevens, who has been performing as Barbra Seville for more than 25 years, wrote on social media that Lake is a friend who has attended many drag shows over the years and even hired him to perform at a family event in her home. "I've performed for Kari's birthday, I've performed in her home (with children present,) and I've performed for her at some of the seediest bars in Phoenix," Stevens wrote on Facebook.

Now Lake seems to be  bending over backwards as a way of establishing  her "bonafides" when it comes to attacking the LGBTQ community and undermining our rights. She has been doubling down with some outrageously homophobic claims and rhetoric:

Recently, Lake accused President Joe Biden of promoting “grooming,” claiming that he is “withholding National School Lunch Program Funds from schools that don’t adopt his perverted sexual agenda.” In reality, what happened is that the Department of Agriculture released guidance that would prohibit anti-LGBTQ discrimination in any program that receives federal nutrition money, including many school lunch programs. Notably, the guidance only applies to those specific programs; schools that follow the guidance in those programs while discriminating against LGBTQ students in other ways would continue to receive funding. Lake has frequently stated her opposition to LGBTQ inclusion in schools. In a March interview on KNST radio, she blasted schools that teach students about gender identity, claiming that they are promoting “confusion.”

All of this pales to her latest endeavor. According to Mother Jones, Lake is airing an ad featuring an extremely homophobic pastor:

The spot was paid for by the Yuma County Republican Central Committee and authorized by Kari Lake, the Trump-endorsed election denialist who is the GOP candidate for governor. It covers the Republican basics: A seemingly conscientious and decent owner of a small business—and his family—is dealing with economic hardship and feels endangered by those liberal Democrats. But the ad leaves out important information: Erickson is not merely a local business owner concerned with inflation; he is a homophobic and Islamophobic pastor.

How homophobic? Very. Erickson pulls out anti-LGBTQ propaganda from way back in the day. We're talking the Paul Cameronesque type lies:

In a 2014 sermon on homosexuality, Erickson proclaimed that “fifty percent of the homosexual LGBT-Now-Q community, 50 percent have AIDS. One in twenty are child molesters, on the sex offender registry.” These numbers were way off. In 2014, Gallup found that about 9 million Americans self-identified as LGBT, and a different study concluded that about 700,000 gay and bisexual men were living with HIV, far fewer than half the gay and lesbian population.
Moreover, Erickson’s stats about LGBT child molesters were dangerously false. Under his math, about half of the 800,000 or so people on sex offender registries would have to be gay, yet according to one study, heterosexual pedophiles outnumbers homosexual pedophiles by 11-to-1. He was recklessly and inaccurately depicting LGBT people as threats to children.

In that sermon, Erickson also claimed, “80 percent of homosexuals have STDs, and—how sad is this?—2 percent, 2 percent of homosexuals in the LGBT community make it to the age of 65. The average lifespan for an average person in our world is 75. Those is the LGBT community, most of them don’t make it to 39.” There seems to be no scientific basis for these claims. Though HIV still presented a health risk for gay men, the American Journal of Public Health in 2016 noted, “no general population-based survey, to the best of our knowledge, has examined whether self-identified lesbians, bisexuals, or gay men are more likely than are heterosexuals to experience early mortality.”
Erickson claimed that the “average homosexual has had in a lifetime over 500 sexual partners. Eighty percent admit that half of them are absolute total strangers. Thirty percent of those who commit homosexuality, 30 percent, have had over 1000 partners. Three hundred different people a year.” A 2013 study found that the mean number of male sexual partners for gay and bisexual in the preceding year men was 2.3—which indicates the “average” gay man does not have hundreds of sexual partners.

I'm just surprised (and relieved) that Erickson didn't pull the "gays stuff gerbils up their rectums" lie.
Lake's two-faced pandering may actually take her to the governor's mansion in Arizona. At the very least, it should serve as a warning to the LGBTQ community. Some people who smile in our faces or claim to be our allies will turn on us when it is most convenient for them. When they hug you, they are looking for the right place  in your back to jam the knife.
Posted by BlackTsunami at 4:59 PM No comments:

Joe Biden takes a swing at trans health care bans: “No state should be able to do that” - Of course the opposition tries to make it sound like President Biden is for harming kids, but that ain't gonna work.
Heritage Foundation’s New Model Legislation Combines Attacks on Trans Youth and Public Education​ - And we continue to fight the battles.
LGBT+ Center Orlando cancels drag queen story hour after Nazi threats, director says - I understand the need for safety but the more we give in, the more homophobes are empowered.
30 Football Players Who Came Out of the Closet - I did not know there were that many.
Posted by BlackTsunami at 8:37 AM No comments: