One person who won his election in November wasn't sworn in today as a member of the new Congress. And it should be of extreme interest to the LGBTQ community.

Newly elected members of the House of Representatives were sworn in on Thursday, but anti-LGBTQ activist and pastor Mark Harris was not among them.

On Election Day, Harris appeared to be the winner of a close race in North Carolina’s 9th congressional district, but the state’s bipartisan election board refused to certify the results of the race. Evidence began piling up that a political operative hired by Harris—in spite of red flags about his past behavior—may have engaged in potentially illegal and fraudulent shenanigans involving the collection of absentee ballots in both the Republican primary and general elections. In that now-questionable primary race, Harris unexpectedly defeated incumbent Rep. Robert Pittenger.

“Republican Mark Harris was meeting with state election investigators Thursday morning even as he asked a Wake County Superior Court judge to certify his election in the 9th Congressional District immediately,” reports the Charlotte Observer.


Right-Wing Watch goes on to point out how the campaign for Harris was a huge deal to the religious right, even to the point of having Mike Pence's wife, Karen, campaign for him.

And this situation should be a huge deal to the LGBTQ community because Pence is well-known for his statements and actions against the community.

In 2012 he led the fight for a North Carolina constitutional amendment banning same-sex marriage. The amendment passed, but it was struck down, along with similar laws in other states, by the U.S. Supreme Court in 2015. Shortly after the ruling, he said, “Five rogue lawyers on the U.S. Supreme Court say ‘no’ and suddenly the media is sweeping the county saying same-sex marriage is the law of the land.” He contended that such changes in law can be made only by legislatures, not courts. He continues to hold that view, although he told the Observer this year that he accepts that same-sex marriage is “exercised currently as the law.”


In addition, Harris was reported to have suggested that things were better when "homosexuality was criminalized.

As it stands right now, too bad Harris wasn't as strident against voter fraud as he is against the LGBTQ community. 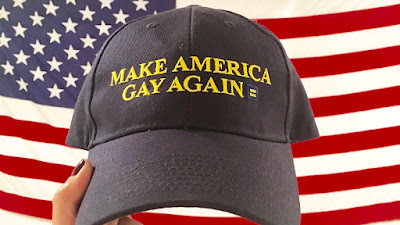 Record number of LGBT members of Congress to be sworn in today - Sweet! I said it once and I will say it again. If LGBTQs want to change the system of how the religious right bogarts and pushes members of Congress to support their mess, we need to be in the arena. I am not saying vote for someone simply because they are "family." I AM saying that a few us in Congress can't hurt. Especially with a presidential administration such as this.

The Trump administration is planning a far-reaching rollback of civil rights law - And looks like the Congress is coming in just in time.

Trump Is In His Best Position Yet To Confirm Incompetent Judges - Unfortunately, there is a bad side. Another year of fighting like hell. Bring it on.

Retirement Housing Options for LGBT Seniors - Wonderful! Our elders need not be forgotten.

Brazil’s new president Jair Bolsonaro already let down the LGBT community - The struggle is real and it is universal, y'all. This joker didn't even wait before acting the fool.
Posted by BlackTsunami at 9:23 AM No comments: