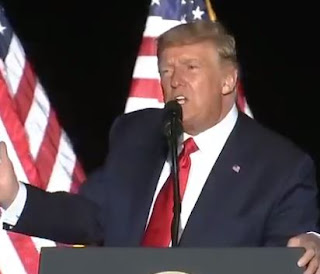 My vision of hell without of doubt would involve being eternally trapped in a Donald Trump rally. I avoid watching them and to this day have never seen one. As the following tweet from the Lincoln Project demonstrates, they are pretty much all the same - an inept fool incoherently rambling while a bunch of mind-sucked sycophants hang on his every word as if it's the necessary ingredient for their survival. But the Lincoln Project added and subtracted a little something which breaks down this particularly rally, the one held recently in Nevada, tolerable and downright funny. If you ask me, it's more coherent than an actual Trump rally. Though you may feel it is 74 seconds too long.

CA governor signs law to equalize punishments for gay & straight sex offenders - Conservatives have told all sorts of lies about this bill. Here is what it actually does.
YouTube comedian Randy Rainbow breaks silence on past racist, transphobic jokes with awkward Donald Trump ‘interview’ - Works for me. No one is perfect and those truly apologetic over past behavior should be given slack. To a degree.
Marvel Just Revealed This Iconic X-Men Character Is Bisexual- Surprise! I was sure it would have been Wolverine.
LGBTQ: The letters Republicans didn’t utter - Preach!!
Posted by BlackTsunami at 8:48 AM No comments: