I don't like the 'I told you so' narrative about this but just because I don't like it doesn't mean it isn't important.

Dave Rubin is a prominent gay conservative. Forbes describes his clout as such:

Rubin has been cultivating an intolerant audience for several years, with his talk show The Rubin Report functioning as a cushy platform for hate-mongers like Stefan Molyneux and Milo Yiannopoulos, a safe space where all the questions are softballs. According to Rubin, his show is "a hub for misunderstood or canceled people or to-be-canceled people to express themselves honestly." Rubin has previously compared progressivism to a “mental disorder,” and through his talk show, attempts to push the idea that leftists and liberals are the real bigots, and that conservatives are more accepting of dissent. However, Rubin has struggled to prove this notion, hindered by his own audience’s refusal to accept his sexuality.
Rubin, a gay man in a socially conservative space, has never been been fully accepted by a vocal segment of his audience, or even his peers and supposed “friends.” This is underlined by an infamous conversation Rubin shared with fellow culture warrior Ben Shapiro, in which Shapiro flatly refuses an invite to Rubin’s anniversary party, citing Rubin’s sexuality as the reason he wouldn’t attend. Rubin passively accepts Shapiro’s intolerance as a reasonable reaction, calling his response ”interesting.”

"Passively accepting intolerance" shown towards him by his conservative colleagues seemed to have been a price Rubin willingly paid for the prominence and bank account which comes with being a "gay conservative." But as of recently, things have changed considerably. You see, Rubin and his partner announced that they are going to become parents. And many of his conservative colleagues have been, shall we say, not eager to congratulate him. On the contrary, some folks have been downright nasty towards him:

Edward Szall and Gillyan Christensen say that Dave Rubin and his husband adopting children "is the most evil thing that you could ever do" and call them "the spiritual version of neo-Nazis" for doing so. The only solution, obviously, is "to ban all gay people." pic.twitter.com/es8y8HgYP4

'Former gay' Milo Yiannopoulos, whose nonsense Rubin amplified, had this to say:

The American Spectator has this to say:

While people cheer the happy baby news, each step of the baby-making, having, and parenting process uses, abuses, and negates women. More than that, it denies the humanity and needs of the child. Less than a baby to nurture, the child is a commodity. The child is a product. The consumer is an adult who cannot obtain progeny by natural means and so must buy one by artificial means.

And then we get the word from Jenna Ellis about sin. This is the SAME Jenna Ellis who consistently lied about voter fraud to get the 2022 election overturned. I guess she is so busy talking about the 'sin' of homosexuality' that the sin of lying totally escaped her: 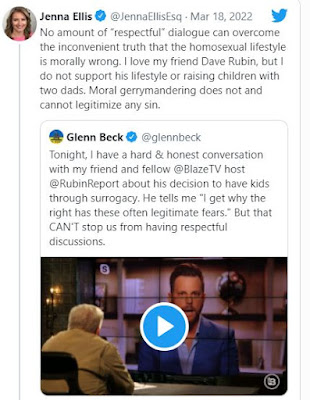 And I won't even MENTION the comments on the far right conservative site Free Republic. They range from simply ugly to downright bloodthirsty.
I do NOT care for Dave Rubin for obvious reasons. But I support his right to have a family. I support the right of all LGBTQ people to create and have families.
BUT I also have a message to Mr. Rubin
Attack us, malign us, or disrespect us 'on the left' all you want, just so long as you remember who was talking shit about you, your husband and your kids. That would be your friends on the right.
The verbal blowback you are receiving is only a smidgen of what us less prominent LGBTQ folks have gotten from your allies. It's something you helped to happen.
How does it feel to realize that you too are on their menu?
Big hat tip to Forbes magazine.
Posted by BlackTsunami at 4:31 PM 1 comment:

Ketanji Brown Jackson schooled GOP senator who ranted about gay marriage​ - Only took her nine words to do it.
More Than One-Third of Trans Kids Are At Risk Of Losing Gender-Affirming Care - This is terrible. There is a reason why the right wants us distracted by lies regarding trans athletes. So folks can ignore this.
Fox News hosts launch dehumanizing anti-trans attacks against Adm. Rachel Levine and UPenn swimmer Lia Thomas - Trash is trash.
Disney employees stage walkouts to protest company response to Florida bill - That's right Disney. We haven't forgotten about yo' ass.
Raven-Symoné and Cast of Raven's Home Walk Off Set Over Florida's 'Ridiculous' 'Don't Say Gay' Bill - Good for them!
Posted by BlackTsunami at 8:30 AM No comments: