For my sisters - Bound (1996), an awesome film noir involving a lesbian couple (Jennifer Tilly and Gina Gershon) in a scheme to steal $2 million from the mob.

Incredible, uncompromising portrayals by Tilly and Gershon make this movie a classic. And yes, it has a happy ending (sorry folks, but if you have read this blog, you know how I stressed the importance of members of the lgbtq community seeing positive gay-theme movies with happy endings):


Past Know Your LGBT Posts:

Anti-Gay North Carolina State Sen. Forrester May Have Falsified Additional Medical Credentials - For eight years, anti-gay North Carolina legislator James Forrester pushed a state constitutional to ban gay marriage. Now that the bill has passed and the voters will vote on it next year, Forrester is now learning the old adage about being careful what you wish for because you may just get it.

Seeing the Forresters for their truth-obfuscating trees - And as Jeremy Hooper points out, it is waaaay past time for folks to get hip to the homophobia and Mr. Forrester and his wife.

After gay ban repeal, Pentagon rules that military chaplains may perform same-sex unions - Good news all around for same-sex couples and for the simple fact that this will cause religious right heads to explode.

Oklahoma Paper Blasts "Perverted" Gay Election Board Member - This nasty, hate-filled attack is the type of thing that folks like Maggie Gallagher and Matt Barber consider to be "expressing the simple belief that homosexuality is a sin."

Fischer: Gays and Islamists Are Driven By The Same "Dark Energy," Anti-Christ Spirit - Aw hell! Who told him? LOL

Montana “Pastor” Blames Gays For His Legal Woes - Apparently WE are the reason why he has six felony charges against him.

Barber: Gays Know They Are Internally Disordered - Okay, while I am not trying to be stereotypical here and I am certainly not trying to make any comments regarding Barber's sexual orientation (cause I simply don't know), I am getting a little annoyed with my homosexuality being attacked by a man who poses like he is auditioning for the "Men On . . . " sketches from In Living Color:

Posted by BlackTsunami at 9:06 AM No comments: 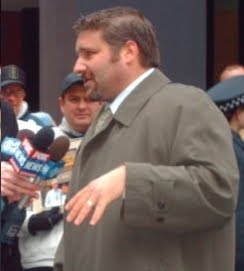 Matt Barber of the right-wing Liberty Counsel is angry at President Obama and the Census Bureau:

A pro-family attorney says the U.S. Census Bureau's decision to include households headed by same-sex couples is just another attempt by the Obama administration to legitimize same-sex "marriage."

The 2010 census, which shows that about 20 percent of the estimated 646,464 homosexual couples in the country checked "husband" or "wife" boxes on their census forms, marked the first time the Bureau tracked information about same-sex "spouses." Matt Barber, vice president of Liberty Counsel Action, sees the report as another tactic of the radical homosexual activist lobby in its attempt to undermine the Defense of Marriage Act (DOMA).

"This is another attempted chip-away at the Defense of Marriage Act and to gain full federal sanctioning and government recognition of counterfeit same-sex marriage," he contends.

That's right. Apparently the secret army for the "advancement of homosexuality" met at our secret headquarters (shaped like the famed Hall of Doom from Challenge of the Superfriends) and decided that the Census Bureau is the best place to push our supposed agenda.

I won't even comment about how stupid Barber's comments are. But I will say how they underscore how nasty and mean-spirited the man is.

Doesn't sound very Christian to me.

I think I like Barber better when he obsesses over "gay sex."

Posted by BlackTsunami at 4:48 AM No comments: