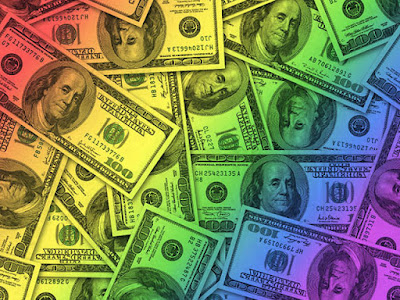 For an organization which claims to be about truth, morality, and Christian values, the Family Research Council seems to use a lot of deception and misdirection to get its point across.

Case in point is the situation about a bill in Congress which would give tax dollars to adoption agencies which uses religion to discriminate against gays. The bill would also punish LGBT-friendly states if they tried to pass anti-discrimination laws.

The Family Research Council heavily supports the bill and, in that effort, pushed a heart-tugging story via the right-wing Daily Signal about a young expectant mother, Kelly Clemente,  who supposedly only wanted to give her baby to a family which shared her values.

The article and the video (courtesy of the Heritage Foundation, which also has a hand in creating copy for The Daily Signal. It's all connected, folks) is a definite tearjerker:

Now, 10 years later, she says that being able to handpick her son's family was the greatest comfort she had. So when a movement started to take away that right from moms like her, she couldn't help but speak out. When liberal activists started punishing adoption agencies for making sure kids were placed in homes with matching beliefs, Kelly was horrified. She watched as the dominos started to fall in places like Philadelphia, Massachusetts, Illinois, California, and D.C. Suddenly, groups like Bethany and Catholic Charities were being given a choice: start putting children in homes that violate the morals of birth moms like Kelly, pay crushing fines, or shut your doors.

"I would never tell a gay couple, 'Oh, because you two are in love with each other, and you're not a heterosexual couple, don't even think about adopting a child.' That's not what I'm saying," Kelly explains in Heritage's new video. "What I am saying is that birth mothers have a right to choose." Yesterday, the House Appropriations Committee agreed, voting 29-23 to protect the freedom of moms like Kelly. Thanks to adoption champions Reps. Robert Aderholt (R-Ala.) and Mike Kelly (R-Pa.), the new Labor-HHS spending bill now includes an amendment that says the federal government can't discriminate against faith-based groups if they decide not to provide services like adoption or foster care on religious grounds. The bill also says that if a state or local government is found in violation, HHS will withhold up to 15 percent of the federal child welfare funding from the areas responsible.


Just like the baker Jack Phillips in the Masterpiece cakeshop case, Clemente is allowing herself to be used as a pawn in order the cloud the issue. The issue is not who she picks to adopt her child or where she goes.

The issue is why should gay taxpayers have to give our hard earned money to groups which freely discriminate us. The Family Research Council avoids even bringing this up. The organization throws out another misdirection:

The Democrats, meanwhile, continued cranking out lies about what the amendment really does, insisting that it somehow stops same-sex couples from adopting. Hardly! The same adoption agencies that matched them with kids before this bill will still be matching them with kids after. That's because this debate has never been about banning LGBT adoption -- it's about letting everyone operate by their own set of beliefs.


Since using personal stories in order to control the narrative seems to be the order of the day for the anti-LGBTQ right, allow me to give mine. 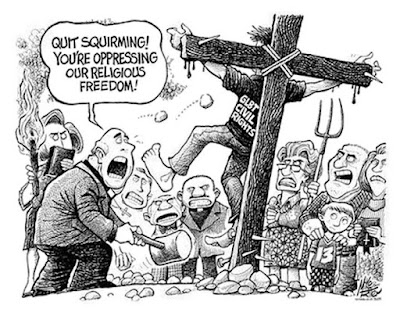 As to be expected, anti-LGBT organizations are either cheering 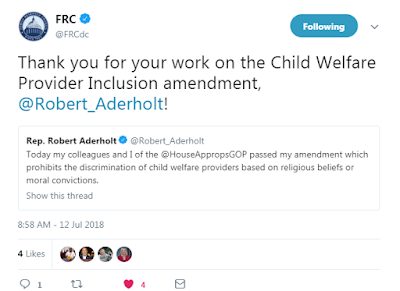 or deliberately distorting a bill which would allow adoption agencies which discriminate against gays to still receive tax dollars and would also punish states which protect the LGBT community from discrimination.


But most importantly, the bill gives a clear view of the how the anti-LGBTQ right reduced religion into a weapon against LGBTQ equality and safety in two ways

1. The bill itself weaponizes religion, one particular religion - i.e. conservative evangelical Christianity - to create a legal right to discriminate against the LGBT community.

2.  The bill deliberately degrades the LGBT community by erasing us as taxpaying American citizens and forces us to pay for services which are denied to us.


These points need to be repeated not only about this bill but also the entire narrative of "religious liberty" as perverted by groups like the Family Research Council and the American Family Association.