I predicted it earlier today, and it is happening.

A group of conservative black pastors are responding to President Barack Obama’s support of same-sex marriage with what they say will be a national campaign aimed at rallying black Americans to rethink their overwhelming support of the President, though the group’s leader is offering few specifics about the effort.

The Rev. Williams Owens, who is president and founder of the Coalition of African-Americans Pastors and the leader of the campaign, has highlighted opposition to same-sex marriage among African-Americans. He calls this campaign “an effort to save the family.”

“The time has come for a broad-based assault against the powers that be that want to change our culture to one of men marrying men and women marrying women,” said Owens, in an interview Tuesday after the launch event at the National Press Club. “I am ashamed that the first black president chose this road, a disgraceful road.”

CNN deserves kudos for telling the entire story about Owens and his fake group, including talking about comments which Owens made linking gays to pedophilia:

Owens has long been an opponent of gay marriage and consults with the National Organization for Marriage as a liaison to the black churches.

“If you watch the men who have been caught having sex with little boys, you will note that all of them will say that they were molested as a child…” Owens said. “For the president to condone this type of thing is irresponsible.”

Owens later walked about those comments back, saying he didn’t think the president was condoning molestation.

CNN also did make mention of NOM's wedge strategy, i.e. the group's plan to play gay and black America against each other on the subject of marriage equality.

Jack Phillips, Denver Baker Who Refused Wedding Cake To Gay Couple, Defends His Stance - Phillips says he would rather lose his business before making a cake for a gay couple. It's good for us to know who NOT to give our business to. However, it goes beyond that. If businesses are allowed to discriminate against gay couples on the basis of their religious beliefs, then where is that line drawn? Today it's gays. Tomorrow it may be people of a different faith, be it Jewish or Catholic. And then there is the case of racial ethnicities.

Report: marriage equality plank added to Dem platform draft - Celebrate but also keep in mind and be ready for those who will seek to exploit this against President Obama.

On death penalties, fast food, and the suspect tastiness of felt puppets - Some supporters of Chick-Fil-A are just dumb as hell.

Liberty Counsel Jumps on the Boycott Hypocrisy Bandwagon - One good thing about this Chick-Fil-A is how it exposes the hypocrites. Wasn't Matt Barber - a defender of Chick-Fil-A - one of the folks who organized a failed boycott of McDonalds a while back?

NOM’s dumps are flattening out - Meanwhile, the National Organization for Marriage's anti-gay protests are fizzling hard.

Posted by BlackTsunami at 8:58 AM 2 comments:

Simple answers to the questions about the Chick-Fil-A boycott 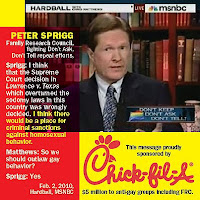 An online buddy of mine, Rusty McMann, has assembled some simple answers to the questions about the gay community's anger at Chick-Fil-A, as well as why we are boycotting the restaurant.

This is necessary because while there have been so many television stations, newspapers, pundits, and columnists who have weighed in on the controversy, very few are trying to get the full story:

Simple answers to difficult questions about the Chick-Fil-A boycott

Q.  Why are the gays making such a big deal out of this?  Aren’t we all entitled to our own opinions?

Q.  OK  fine.  So what’s the big deal and why are *so many* of gays so upset that Dan Cathy is against gay marriage?

A.  Dan Cathy is perfectly entitled to his opinion about marriage equality or anything else.  That’s not what has so many people upset.  The reason we are boycotting Chick-fil-A is because the CFA Corporation, through its charitable arm The WinShape Foundation, has donated almost 4 million dollars to organizations and causes that are dedicated to doing harm to gay men and lesbians – not just here in the US, but around the world.

Q.  Oh, come on.  The WinShape foundation is about leadership training and strengthening families.

A.  While it is true that the WinShape foundation has a number of admirable programs for at-risk youth, it would also appear that WinShape believes that “curing” homosexuality (a concept that is roundly rejected by the scientific community) and preventing same-sex couples from being legally married is something that trains leaders and makes families stronger – because they give A LOT of money to foundations and advocacy groups that are hostile to the LBGT people.

$1,188,380 to the Marriage & Family Foundation (founded by Bubba Cathy (Dan’s Brother) the MFA provides funding to organizations that preach that the American family is threatened by the proliferation of same-sex couples )

$480,000 to the Fellowship of Christian Athletes (dedicated to “curing” gay athletes);

$247,500 to the National Christian Foundation (is a grant-making foundation that has provides money to anti-gay groups like Focus on the Family, Family Life, and the Family Research Council);

$1,000 to the Family Research Council (which has been designated a hate group by the Southern Poverty Law Center because of the provable falsehoods it spreads about gay men and lesbians);

$2,500 to the Georgia Research Council (which lobbies against marriage equality, both in Georgia and around the US); and

$1,000 to Exodus International, an organization dedicated to “curing homosexuality” and whose board member  Don Schmierer had a hand in the creation of  a bill in Uganda that could "punish homosexuality" with death .

So every chicken sandwich and waffle fry you purchase helps to fund one of those organizations.