A short while ago, we lost an icon in the gay community:


Jack Fertig, a professional astrologer who became famous as Sister Boom Boom, one of the early members of the Sisters of Perpetual Indulgence, during San Francisco's gay scene of the 1980s, died Sunday at his San Francisco home.

Mr. Fertig, who was 57, was diagnosed with liver cancer in 2011, said Elias Trevino, his partner of 18 years. He had been in hospice care and returned home only the day before he died.

In his persona as Sister Boom Boom, he was the best known and most flamboyant of the Sisters of Perpetual Indulgence, a group of mostly gay activists whose spoof of Roman Catholic religious women delighted - and outraged - thousands of people in the early flowering of the Castro District as a gay mecca.

In 1982, running as Sister Boom Boom and listing his occupation as "nun of the above," Mr. Fertig got 23,124 votes as a candidate for the San Francisco Board of Supervisors. He came in eighth; the first five were elected. The Sisters said Sister Boom Boom ran "a uniquely San Francisco campaign of radical politics and nun drag."

Mr. Fertig joined the Sisters not long after they were formed in 1979 and soon became the group's public face. He wore stiletto heels, foam breasts and a fake nun's habit. His name appeared in Herb Caen's Chronicle column regularly, and he was often seen on television. He performed an "exorcism" in Union Square during the 1984 Democratic convention to purge anti-gay elements from the party.

He saw the Sisters as a way "to promulgate joy and expiate guilt," according to Jok Church, who knew him for more than 30 years.

Read more »
Posted by BlackTsunami at 3:17 PM No comments:

Dana Milbank: Hateful speech on hate groups - Dana Milbank of the Washington Post writes an unbelievably bad argument for taking the "hate group" label away from the Family Research Council. His piece can be epitomized by the following passage:

I disagree with the Family Research Council’s views on gays and lesbians. But it’s absurd to put the group, as the law center does, in the same category as Aryan Nations, Knights of the Ku Klux Klan, Stormfront and the Westboro Baptist Church. The center says the FRC “often makes false claims about the LGBT community based on discredited research and junk science.” Exhibit A in its dossier is a quote by an FRC official from 1999 (!) saying that “gaining access to children has been a long-term goal of the homosexual movement.” Offensive, certainly. But in the same category as the KKK?


Excuse me? How is it that Milbank, a writer, refuses to recognize the power of words? He seems to be saying that simply because FRC doesn't use derogatory terms in its language or violence, that it's wrong to call this language hate, even though it is clearly geared to inflame the fear and hatred of others. I wonder how Milbank feels about the language of the Klan when it claims that black men are obsessed with raping white women.Words are power because they can inflame hatred and fear. And we all know that violence is always the next step after hatred and fear. Milbank's lazy column is indicative of the fact that the gay community has to combat not only religious right lies but a media so lazy and complacent that they are willing to play down how these lies affect the gay community.


What the Right Gets Wrong About the FRC Shooting - Adam Serwer of Mother Jones gets it:

. . .  if an organization were putting forth papers arguing that blacks, Latinos or Jews were inherently prone to committing certain crimes and recommended laws specifically tailored to restricting their behavior, would we call them a hate group? At the very least, the SPLC has evidence for its decision beyond simply disliking FRC's politics.

Audio: Tony Perkins claiming heinous Uganda bill 'upholds moral conduct' - Remember that awful bill to imprison gays in Uganda? Here is what FRC said about it before scrubbing it from their website.

NOM Will Use FRC Shooting To Its Advantage - Surprising no one of course.

Posted by BlackTsunami at 8:56 AM 4 comments:

During his press conference yesterday in which the Family Research Council's head Tony Perkins blamed the Southern Poverty Law Center for the shooting at his organization's headquarters, there was a certain irony which needs to be noted.

On Wednesday, a 28-year-old man came into the group's office pretending to be an intern. After allegedly saying that he didn't agree with FRC's anti-gay policies, he pulled a gun and fought a security guard. The guard was able to take the gun away from him after sustaining a wound in his arm.

During yesterday's press conference and on Fox News, Perkins blamed the Southern Poverty Law Center for incident. In 2010, SPLC labeled FRC as a hate group because of how it spreads lies, distortions, and propaganda against the gay community.

Perkins said the following at the press conference:


Perkins said “reckless rhetoric” helped lead to a man shooting firearms in the office. He “was given a license to shoot an unarmed man by organizations like the Southern Poverty Law Center,” Perkins said.

For its part, SPLC refused to back down, calling Perkins' claims outrageous. The organization denounced the young man's violence but stood firm in its reasoning for declaring FRC to be a hate group. SPLC's Mark Potok said the following:


The FRC is listed as a hate group because it has knowingly spread false and denigrating propaganda about gay and lesbian people and “not, as some claim, because it opposes same-sex marriage.”

During his media excursion, Perkins was careful not to go into detail as to the claims his group has made in the past about the gay community. During an interview on Fox News, he said that his organization was merely "defending the family."

However, the publication Metro Weekly discovered something during Perkins' press conference:

Perkins claims that FRC was designated a "hate group" for its political stance against marriage equality, even though SPLC and others have long documented the organization's stances and statements on homosexuality, including the consistent linking of gays to pedophilia. Metro Weekly captured the entire press conference on video. Despite some audio issues, what really stands out is, just over Perkins's right shoulder, a man wearing a priest collar and a t-shirt for emblazon with www.tearsforchildren.org, along with quotes about Sodom &Gommorrah and stickers promoting the National Organization for Marriage. 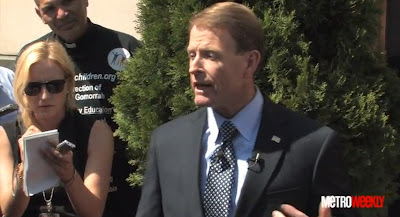 Metro Weekly goes on to say:

On its website, Tears for Children -- led by Maryland's "Minister Leroy" -- lists the Family Research Council as one of its partners, along with other anti-gay groups such as the American Family Association. From the website's home page: "I weep because of sadness in the world. I can not look into the eyes of a child and tell them that they have a choice of being a heterosexual or homosexual. My heart weeps when I think about the wolves and snakes who seek to manipulate innocent minds to believe that sin should be celebrated. We must speak truth in spite of evil and wickedness."

Reverend Leroy is Leroy Swailes, a man who gave what was described as "unhinged" testimony in front of the District of Columbia Board of Elections and Ethics in 2009 about a referendum which would have overturned the law recognizing marriage equality in that area. During his testimony, Swailes connected homosexuality with pedophilia, bestiality, the Anti-Christ, Satanism, and the destruction of humanity:


And there lies the grand irony. If Perkins wants to call out "reckless rhetoric, maybe he should start with FRC's alleged partners.That is if he feels the need to talk about it during his tour of martyrdom.