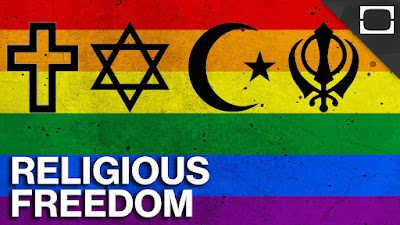 On Sunday, this country celebrated Religious Freedom Day. Apparently this is to commemorate the freedom to worship as you feel - and even not at all - in America. President Biden even issued a proclamation, which reads in part:

From the earliest days of our Nation, courageous people from every part of the world have come to the United States in search of religious liberty, risking everything to flee oppression, persecution, and discrimination because of their beliefs. Our Founders enshrined the principle of religious freedom in the First Amendment to our Constitution, establishing it as a cornerstone of who we are as a Nation. Today, America remains a religiously diverse Nation — a land uniquely strengthened by the routine and extraordinary commingling of faiths and belief systems. On Religious Freedom Day, we recommit ourselves to the protection and advancement of this vital aspect of our American character — and to protecting the freedom of people of all faiths and none, both across our Nation and around the world.

All in all, President Biden's statement was congenial. However, the Family Research Council and its president, Tony Perkins was not happy with it. In fact, they made the argument that Biden was being hypocritical.
And why?
Because apparently their version of 'religious freedom involves using the concept as a weapon to foster anti-LGBTQ discrimination. And President Biden doesn't see it that way.
FRC and Perkins gave a list of reasons why they felt Biden's proclamation was hypocritical. However, in doing so, they made the argument that the President has a high commitment to the safety and equality of LGBTQ Americans.

. . . even though the president's comments rightly place religious freedom as essential to the American way of life, his administration has unfortunately failed to meaningfully protect the rights of the faithful.
For example, following his inauguration on January 20, 2021, the new president issued an executive order that requires federal agencies to interpret federal laws that prohibit sex discrimination as also prohibiting discrimination based on sexual orientation or gender identity. In doing so, Biden expanded the holding of the problematic Bostock v. Clayton County U.S. Supreme Court decision far beyond its intended scope of employment discrimination.
On February 4, 2021, President Biden issued a memorandum on "Advancing the Human Rights of Lesbian, Gay, Bisexual, Transgender, Queer, and Intersex Persons Around the World." This memorandum "reaffirms and supplements" an Obama administration executive order that sought to ensure "United States diplomacy and foreign assistance promote[s] and protect[s] the human rights of lesbian, gay, bisexual, and transgender persons everywhere."
What this really means is imposing the far Left's human sexuality agenda onto other countries, including U.S. allies with laws upholding natural marriage and human sexuality. This is just one example of how instead of prioritizing religious freedom overseas, the Biden administration has given preference to radical LGBT policies.
. . .On March 26, 2021, the Department of Justice (DOJ) issued a memorandum on the application of Bostock to Title IX of the Education Amendments of 1972, paving the way for schools' mandatory acceptance of gender identity ideology. In addition, President Biden issued a statement on May 17 recognizing "International Day Against Homophobia, Transphobia, and Biphobia," which celebrates the anniversary of the World Health Organization's declassifying homosexuality as a mental disorder.

It's rather clever how Perkins and FRC attempt to cloud their prejudices as legitimate concerns with regards to religious freedom. But let's not be fooled. Their complaints simply aren't legitimate.  They are angry because President Biden won't adhere to their version of religious freedom in which the concept is used as a cudgel to keep LGBTQ people underfoot. Perkins and FRC have on so many occasions stolen ownership of the words 'Christianity' and 'religion'  while full knowing that they aren't the only or final voices on both matters. Whether they like it or not, some religions don't consider homosexuality as a sin and that includes some denominations of the Christian faith they claim to uphold.
Perkins and FRC have very right to believe that LGBTQ equality and religion are two diametrically opposite beliefs never to overlap and that the freedom of one must be sacrificed for freedom of the other to endure. But the point is that they have no right to impose that belief on America for any reason, especially under the false guise of  'religious freedom.'
What they want is the weaponization of religion to foster an environment of discrimination against LGBTQ people. That's not religious freedom. That's bigotry. And bigotry is bigotry even when it comes in the name of God and draped around a cross.
Posted by BlackTsunami at 4:46 PM No comments: 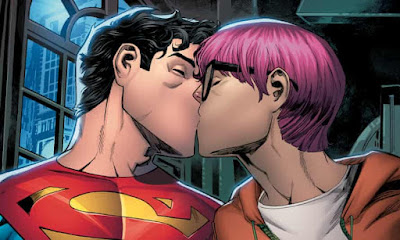 The writer behind the new bisexual Superman has turned death threats into donations for LGBTQ youth​ - Good for him to turn something negative into a positive.
36 LGBTQ+ Movies We Can’t Wait To See In 2022 - This is progress. I remember when you couldn't even see one. I remember the local network in my city refusing to show the movie 'Making Love.'
S.D. Gov. Kristi Noem releases national ad targeting transgender student athletes - A certain trifling governor is targeting trans student athletes to take attention away from the scandal involving her daughter getting real estate license with possibly her help.
Why some LGBTQ students in Utah say their health education is inadequate - Kudos to these kids for speaking out.
Posted by BlackTsunami at 9:24 AM No comments: