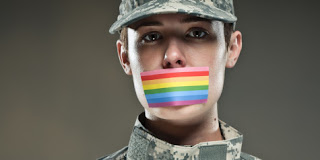 Don't be fooled. When it comes to Trump's attempt to ban transgender men and women from serving in the military, groups like the Family Research Council will say their support of this ban has to do with caring about costs. But it's actually about bigotry.

It's amazing how FRC continues to push the lie that the amount of money devoted by the military to trans health care is extreme:

Already, as of February 1, the Pentagon has forked over $7,943,906.75 to gender reassignment surgeries, hormones, and psychotherapy. That’s millions of dollars it could have spent equipment, salaries, and training. Instead, we’re blowing through taxpayer dollars so that troubled service members can use the military as their free ticket to elective surgery. Not a penny of that is going to the DOD’s real mission: fighting and winning wars.

As usual when it spins an anti-LGBTQ narrative, FRC omits certain facts. From PBS News Hour:

According to new data from the Defense Department provided to the House Armed Services Committee ahead of the hearing, the military has spent about $8 million on transgender care since 2016 out of its $50 billion overall health care budget. The Associated Press obtained the data Wednesday.


Read more »
Posted by BlackTsunami at 4:25 PM No comments: