I caught some flack when it came to my post regarding Truth4Time, the anti-gay secret Facebook group, because I did not give the names of the individuals involved.

However during an interview today on the Michelangelo Signorile radio show, I go into detail about Truth4Time, including giving the name of several prominent figures involved with the organization. No private citizens were called out. Like I say during the interview, I have proof of all of my charges:

Posted by BlackTsunami at 7:48 PM 9 comments:

Editor's note on Truth4Time - According to my source, the secret anti-gay Facebook group Truth4Time have dismantled itself. As far as my source knows, the group is disabled/gone from Facebook. I'm not gloating by saying this but you all can run, but you can't hide. Seems to me that if you are doing God's work, you shouldn't be ashamed of said work.

I have to give it up for the folks fighting that awful Amendment One in North Carolina. They didn't just come to fight, they came to win. Check out these two commercials:

Video: And the proud mother merit badge goes to… - This video is too awesome. This is the family environment that the religious right tries to unsuccessfully blot out.

Mat Staver says Day of Silence is a Tool of the 'Radical Homosexual Agenda' to push 'Deviant Lifestyles' - Maybe I'm old fashioned but to me, it's deviant to allow children to be picked on and fear coming to school. Staver needs to check himself.

Posted by BlackTsunami at 9:23 AM 3 comments:

This project is conducted by a secret Facebook group called Truth4Time. According to the creator of the group (whose name shall remain anonymous because he is not a public figure), Truth4Time is supposed to be a library of anti-gay articles, blogs, and other materials for its members to use in their fight against the supposed "gay agenda." Apparently the group has a large lists of documents which contains anti-gay information (i.e. propaganda) that members are invited to use. The founder says that the group is supposed to be a sort of a "behind the scenes support system for the religious right. He seems to think that he is on some type of divine mission. If that is the case, I seriously doubt that it is God who is dictating his marching orders. : 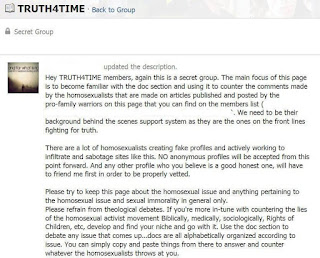 In all fairness, the group isn't breaking any rules (or any laws) with this idea. Members of Truth4Time also encourage each other to go on webpages featuring anti-gay or pro-gay articles and freely comment. Some members of this group who have written columns in publications such as the conservative Town Hall also encourage fellow members to bombard the prospective sites with comments: 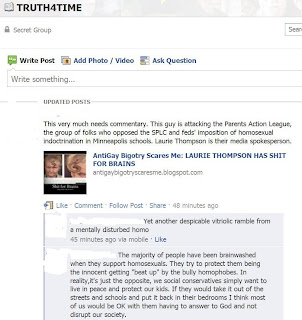 Again, the group isn't breaking any rules or laws by doing this.

But it is the following questionable tactics, such as "ganging up" on pro-gay pages with comments and flagging Facebook pro-gay pages multiple times with the intent on getting these pages removed, which is sure to raise eyebrows. Truth4Time seems to be under the ludicrous impression that gays stoop to this action, so they figure "what's good for the goose is sauce for the gander:" 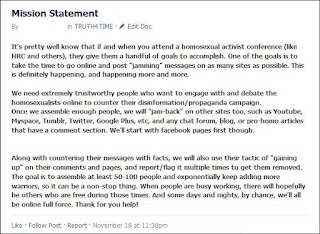 One member of the group, a certain Georgia pastor (who has a long history of maligning the gay community) provides tips on what he calls "leveraging public perception on the subject of homosexuality," or in layman's terms, providing an inaccurate picture of whether or not there is support for lgbt equality: 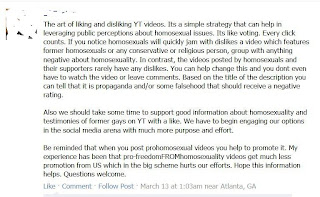 And just who are the members of this group you ask?  I have the list of the members, but  I won't reveal it because many are ordinary citizens, not public figures.

However, that's not to say that Truth4Time does not many contain public figures and prominent members of the anti-gay industry, including:


I should also add that I did not steal this information. A member of the group - who has been disturbed by the comments and plans of this group  - freely gave me this information. The member in question was especially disturbed by a plan (whether it will come to fruition or not) to bombard physicians and school boards with negative and distorted information about the gay community: 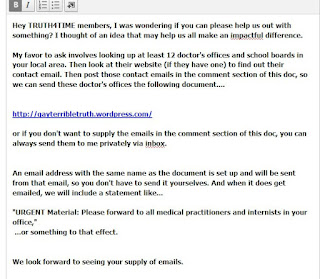 Gayterribletruth is a quackery webpage. It's filled with headlines implying that gay men are beset with all sorts of awful diseases due to their orientations alone. However, if one took the time to read several of the articles, they clearly demonstrate that the bad health besetting these gay men have less to do with their orientation and more to do with how homophobia leads to their poor health choices. And other headlines lead to biased religious right articles on the gay community.

Studies already show that the gay community faces negative health problems in part due to the perceived homophobia of their health physicians. Information such as this sent out to physicians can only serve to exacerbate this problems.

And I don't think that I have to mention what would happen to gay youth if at least one school board takes this information as fact.

One hilarious thing about Truth4Time is how members absolutely despise Joe Jervis of the famous blog Joe.My.God (which of course makes me jealous as hell). Many members of the right have been on a tear against Jervis since he won the GLAAD Blogger of the Year award two years ago. Also Jervis has never been known to mince words when it comes to confronting members of the religious right. Naturally that drives them nuts: 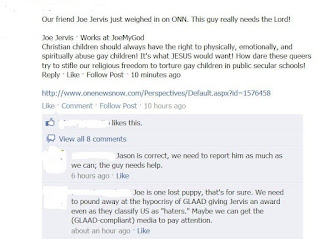 I omitted the post in which members speculated whether or not Satan whispers in Jervis' ear.

Lastly, according to my source - the member of the group who gave me this information - several members have a serious hang up about "gay sex"  like such:

While I am not an armchair psychiatrist, that last point brings to mind the recent study which says that those who speak out the loudest against homosexuality are secretly gay themselves.

But there is something else you should know. According to my source, there is one other secret Facebook group like this one which refers to the gay community in a viler language. And a few folks from Truth4Time are members of that group.

While it is not my intent to make the gay community paranoid as to the plots of the religious right, I am a firm believer of knowing all you can about those who designate themselves as your enemies.

Perhaps it's time for members of the gay community to stop laughing some of these folks off as mere homophobes and take into account the depths they will stoop to in their homophobia.

After all, you never know who is lurking on Facebook.

Editor's note - I deliberately obscured all the names in the listed graphics because the comments of private citizens are mingled with those of religious right public figures. I thought it would be best to be consistent and obscure all of the names.