Sorry, but you can't blame the LGBTQ community for any predators in the church

Courtesy of  Right-Wing Watch is an off-the-wall conversation about sexual abuse in the church featuring E.W. Jackson.

Jackson  is a Trump supporter who once accused presidential candidate Pete Buttigieg of attempting to turn America into a "homocracy." I have no idea what that is. In addition, Jackson has railed against gay parents, called us "servant of Satan," and apparently has more lurid ideas of gay sex than most of us. I guess you can say that he's not an ally of the community. To quote Barney Fife from The Andy Griffith Show, "he's a nut."

Now one homophobic nut is bad enough, but when more than one get together, you get a "nut synthesis"  This means you are going to hear all sorts of zany mess about the LGBTQ community. And with that, I give you a conversation Jackson had with Amy Cooper, the host of vague "Christian show." They are discussing gay men in the church, so you know the conversation is bound to be  . . . something:


Okay, none of that stuff is true. And you will note that neither Cooper nor Jackson offered any proof that gays have been coming into churches and molesting children.

The irony is that while the above conversation happened last week, on Thursday of this week an article came out revealing that a former prominent leader in the Southern Baptist Convention mentored and assisted a younger pastor even after learning of allegations of said pastor engaging in the sexual assault of several women.

Paige Patterson, the leader in question, isn't exactly an angel himself when it comes to the treatment of women:

Patterson’s infamy became clear in April of 2018 when we learned he once offered “advice” to women trapped in abusive marriages by telling them to stay and pray. In a separate sermon, he made creepy sexual remarks about an underage girl. As president of Southwestern Baptist Theological Seminary, he once told an alleged rape victim to not talk to the police and forgive the rapist. Last September, he body-shamed a woman during a sermon while also condemning those who make false accusations against men (as if that routinely happens). And in June, a lawsuit alleged that a former seminary student told him that someone at the school had raped her at gunpoint and taken pictures of her for blackmail purposes… and Patterson responded by shaming and shunning her.


But go ahead and blame gay men in the church, Jackson and Cooper. Go ahead with your bad selves.


# apologies to the  tv show The Boondocks for pilfering its idea to create the notion of the "nut synthesis."
Posted by BlackTsunami at 4:34 PM No comments: 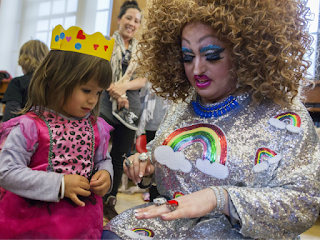 Couple Who Ran Gay Conversion ‘Camps’ for ‘Troubled Boys’ Indicted for Human Trafficking: WATCH - . . . we have some real trouble here.

Conservative publication PJMedia digs a hole into the credibility of anti-LGBTQ hate groups - Post from last night cause it deserves repeating.

Donald Trump’s War On LGBTQ Americans Is Ramping Up - Hold my wig and earrings cause things are about to get ugly.

Gay conservative group loses several leaders after Trump endorsement - Nice to see some gay Republicans with a degree of self-respect.
Posted by BlackTsunami at 8:32 AM No comments: