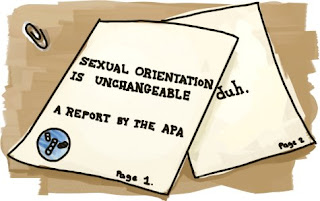 Even though I hope Cincinnati's pro-football team loses to the Pittsburgh Steelers this weekend, I must commend the city for taking the right step in ensuring the health of lgbts and particularly lgbt children. And it did this in spite of opposition.

In the end, council voted 7-2 to pass the law, which prohibits therapy designed to change sexual orientation or gender identity for minors, and imposes a $200-a-day fine on violators. Cincinnati follows four states – California, Oregon, Illinois and New Jersey – and the District of Columbia banning the therapy, becoming the first city outside of D.C. to do so.

. . .  "This is about saving the lives of LGBT people," said Councilman Chris Seelbach, who led the effort to bring the ban to the city. He spoke of Leelah Alcorn, a transgender teenager who killed herself last December; her suicide note cited the controversial therapy to which she had been subjected.
"She challenged us to make her death matter, and we’re doing just that," Seelbach said.

Twenty-one people spoke out against the ban during Council's comment period, decrying it as an assault on free speech and freedom of religion.


These folks should be aware of the fact that both freedom of speech and religion have reasonable limits. You can't yell "fired" in crowded theatre and parents can't keep their children from getting proper medical care even if they claim said medical care is against their religion.

And according to several medical organizations; including the American Academy of Pediatrics, the American Association for Marriage and Family Therapy, and the American College of Physicians, "conversion" or  "ex-gay" therapy is not only fraudulent but can pose a serious danger.
Posted by BlackTsunami at 2:54 PM 1 comment:


Conservatives Threatened A School For Supporting A Transgender Student. Their Response Was Perfect. - Wonderful!  When a school in its area is threatened with a lawsuit for having kids read a book about a transgender child, the Mount Horeb Area School District community (Wisconsin) strike back by having a public reading of the book AND the school board unanimously passes full transgender-inclusive measures. This tea is so sweet and lemony when it is sipped.

Tennessee school wins right to ban gays and women who’ve had sex: ‘This is who we are’ - "For our religious liberty . . . and everything . . ."

Anti-LGBT Texas Officials Claim They're Being Bullied By Pro-Civil Rights Group - Cue the violin. If you are affiliated with national anti-gay hate groups, you only have yourself to blame for the attention you receive.

Lastly, two posts from the past two days to serve as reminders:

That time when a Family Research Council spokesman wanted to 'export' gays . . .

The Family Research Council uses junk science and lies to demonize the Muslim community, just like it usually does against the lgbt community. And it wasn't that long ago that a member of that group was talking about "exporting" gays, much like Donald Trump is talking about not allowing Muslim immigrants to come to the United States. It's sad and funny that scapegoating never changes except for the names of the innocents who are targeted.
Posted by BlackTsunami at 9:12 AM No comments:


I generally go after the Family Research Council for the lies and distortions it spews about lgbts. However, since Donald Trump's eruption against the Muslim community, all attention seems to be there.

And this includes that of the Family Research Council's.

I wish I could say  that the organization actually shows itself as the Christian group it claims to be - i.e. the reason it claims to be against lgbt equality - by calling out Trump's incendiary and prejudiced rhetoric, but no such luck.

Instead, FRC uses techniques which us lgbts should be used to (citing distorted or junk science and wholesale demonization under the cover of religion) to actually defend Islamophobic prejudice in general.  The following is just a snippet from an email by its president, Tony Perkins:

What most people either don't realize or willfully ignore is that only 16 percent of Islam is a religion -- the rest is a combination of military, judicial, economic, and political system. Christianity, by comparison, isn't a judicial or economic code -- but a faith. So to suggest that we would be imposing some sort of religious test on Muslims is inaccurate. Sharia is not a religion in the context of the First Amendment. Under the framework proposed by Senators Ted Cruz (R-Texas) and Rick Santorum, America wouldn't vet refugees based on religion but an ideology that's incompatible with American liberty. "I've proposed actual concrete things [like eliminating the visa lottery system] and immigration law that would have -- not the effect of banning all Muslims, but a lot of them," Santorum explained.

The bottom line is this: the U.S. Constitution is an agreement between people about how they'll be governed. What good is it if people immigrate to America with the sole purpose of undermining that contract? We shouldn't be embarrassed to say that we oppose those who want to come to the United States to destroy it. And while most Muslims are not radicalized, Sharia certainly encourages it. Based on polling from the Center for Security Policy, that's the system most would choose. The majority of Muslims in America believe they "'should have the choice of being governed by Sharia [law].' Sharia authorizes such atrocities as murder against non-believers who won't convert, beheadings, and more unthinkable acts that pose great harm to Americans, especially women."


First of all, for an organization constantly whining about attacks on religious liberty, it is extremely hypocritical for the Family Research Council to dictate what encompasses Islam. No matter what the organization says, Islam is a religion, just like Christianity. And if one looked at the historical perspective, Christianity  once embraced a military, judicial, and economic code in Europe and in the early days of this country.  Lastly, as much as FRC likes to brag how Christian beliefs encompasses the actions and decisions of its favored legislators and leaders, the fact that the group seeks to pull back and claim that Christianity is merely a "faith" is morally dishonest.

Read more »
Posted by BlackTsunami at 4:52 AM No comments: