This video by Movement Advancement Project emphasizes the fact that sometimes when faced with discrimination, some of us simply can't "go somewhere else."

If you can handle discrimination by doing that, remember that there are many who can't, such as elderly LGBTQ Americans:

This new ad illustrates the housing discrimination LGBT Americans can face in the absence of nondiscrimination protections. Nursing Home depicts an older gay man arriving to move into an assisted living facility. But when the facility director learns that the new resident is gay, he refuses to allow him to move in and tells him and his family to leave.

Posted by BlackTsunami at 4:23 PM No comments: 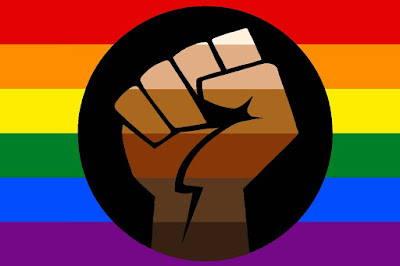 After teacher comes forward about bullying, gay students in Rocklin share similar stories - This is why it is so important for the LGBTQ community to first defend our own before we look to others to defend us. A California lesbian teacher was put on mental health leave after students bullied her. The school did nothing about it. And the parents? Well they backed up their kids with the usual religious right lies by talking about the teacher "pushing her lifestyle" on students. We've all heard that explanation before and in this case, it's more infuriating because the teacher didn't mention her sexual orientation or relationships status in class. The little brats found  photos online. Well now, other gay students in the school have come forward to have the back of the teacher AND to tell their own stories of bullying. Good for them!

As trans high school athletes win state titles, parents petition to ban them - Instead of trying to keep them from competing, maybe your children need to work harder so they can compete against the trans athletes.

Senator Hatch’s pro-LGBTQ floor speech rings hollow - Thank for Sen. Orrin Hatch for speaking up for our LGBTQ kids on the US Senate floor. However, Zack Ford makes a wonderful point here. Talk is cheap in the face of positive action.

Athens GOP leader goes on anti-gay rant on Pulse anniversary - Trash is as trash does.

Meet the amazing gay single dad-of-3 whose husband died before their twins were born - Sad but awesome story of love.
Posted by BlackTsunami at 9:09 AM 1 comment: