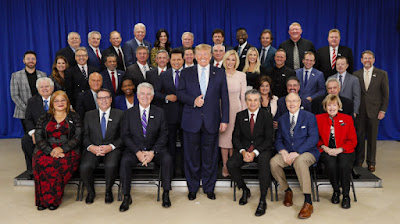 There are a lot of reasons why I, as a gay man, am looking forward to  the upcoming Biden Administration. Probably at the top of the list will be an elimination of the open door policy the White House had with the anti-LGBTQ right.

Because of the support white evangelicals gave Trump in 2016 and beyond, he pretty much became their sugar daddy. When not personally obliging their wishes (such as creating a nonsensical ban on trans people serving in the military based on false information) he let them run amok in his administration and they not only did a lot of what they wanted to endanger LGBTQ equality and safety, they also bragged about their access.

The Family Research Council’s Tony Perkins said in August (2017), “I’ve been to the White House I don’t know how many more times in the first six months this year than I was during the entire Bush administration.” The Susan B. Anthony List’s Marjorie Dannenfelser said she visited the White House seven times in Trump’s first 100 days in office.

Penny Nance of Concerned Women for America said in September, “I’m told from people before me that even under George W. Bush, we didn’t have this kind of access. It certainly is unprecedented and we’re very grateful.” Land gushed about evangelicals having “unprecedented access” to the White House, adding that there “are more evangelicals in this administration as personnel than any administration in my lifetime.”

In exchange for access and help on their policy priorities, Trump has earned the love of the Religious Right. Some called his election a miracle. Others determined that he must have personally come to Christ. Many have gone to bat for Trump’s most controversial comments and positions. An early campaign faith adviser started a group called POTUS Shield that is dedicated to shielding the president from spiritual attack.

In exchange, Perkins and company continued to give Trump support or cover whenever his excesses attracted too much negative attention. The word "mulligan" comes to mind.