I post this entry with an extreme caveat. We don't know the entire story as of yet but if this turns out to be true, it's an awful thing to happen. And I'm just itching to hear how the religious right - particularly NOM - will defend this nurse's actions:

A wounded lesbian Marine veteran who sought mental health treatment at the Dallas VA Medical Center claims she was subjected to an extended anti-gay tirade by a nurse practitioner.

Esther Garatie, 28, a former Marine lance corporal who lives in Dallas, has filed complaints against the nurse practitioner, Lincy Pandithurai of Cedar Hill, with both the VA Medical Center and the Texas Board of Nursing.

Garatie and her friend, Jessica Gerson, have also launched an online petition at Change.org calling for Pandithurai to be fired. By Thursday, Oct. 27, the petition had more than 1,300 signatures.

. . .  In a three-page written statement about the incident, Garatie alleges that Pandithurai inquired about her sexual orientation at the outset of their meeting. After Garatie responded that she was a lesbian, Pandithurai told Garatie she was living in sin and said that was the reason for her mental health issues, according to the statement.

“She sat down and looked at me, and her first question was, ‘Are you a lesbian?’” Garatie wrote in the statement. “Her second question to me was, ‘Have you asked God into your heart? Have you been saved by Jesus Christ?’ This is when I realized that I was no longer a United States veteran in her eyes, I was just a homosexual.”

The session lasted for more than three hours, with Pandithurai citing the Bible and repeatedly telling Garatie she was living in darkness and would be doomed to hell if she didn’t “come back to ‘the light,’” according to the statement.

Penny Kerby, a spokeswoman for the VA Medical Center, confirmed that Garatie’s complaint is under investigation.

More at The Dallas Voice.

Posted by BlackTsunami at 2:00 PM 4 comments:

'11 ways to 'cure' homosexuality' and other Tuesday midday news briefs

11 Ridiculous, Strange, And Terrifying Gay Conversion Therapy Methods For 'Curing' Homosexuality - Self explanatory like crazy. Wait until you see the exorcism.

Chick-fil-A Gave Almost $2 Million To Anti-Gay Groups In 2009 - THIS is a hot mess. No more waffle fries or freshly squeeze lemonade for me.

Lonely Planet Names Uganda Best Travel Destination for 2012 - Cause you know gay folks should always travel to a country trying to imprison us.

US Catholic Church’s Policy Advisor for Marriage: Homosexuality Caused by the Devil - Yep. The gig's up. LOL

Posted by BlackTsunami at 9:27 AM No comments:

NOM - 'It doesn't matter if we stole the photos'

So the National Organization for Marriage is FINALLY commenting on the controversy regarding its theft of photos from Obama rallies. NOM's president, Brian Brown had this to say on its blog:

Rachel Maddow and her friends on the left are all atwitter about a photo collage created for the www.NHforMarriage.com website that NOM is sponsoring with allies in New Hampshire who are working with us to repeal same-sex marriage there.

. . . It's no accident that Maddow and her allies in the gay activist community chose Tuesday to issue their breathless "expose" about NOM's photo "controversy"—on Tuesday the New Hampshire House Judiciary Committee voted overwhelmingly to repeal same-sex marriage! Neither Maddow nor her friends at the Human Rights Campaign can defend imposing same-sex marriage on New Hampshire with no vote of the people. So they issue "reports" and press releases criticizing NOM over a photo collage! They object to us using a photo of a crowd scene, which symbolizes the tens of thousands of New Hampshire voters who are part of our effort. They're upset that the photo was not taken at a NOM rally. Seriously?! NOM using a common use photo in the public domain is considered a great scandal, yet they can redefine marriage—the most important social institution of society against the wishes of New Hampshire voters—and nobody is supposed to object? It's as if the institution of marriage gets mugged, and they complain about speeding in the neighborhood when someone rushes it to the hospital!

Naturally Brown ends this post with a request for money to "save marriage."

Brown, if you haven't caught on by now, is lying through his teeth and I almost wish that the old adage about "getting struck by lightning would apply here."

NOM did not use a common use photo. It used a photo specifically taken at a rally for Obama: 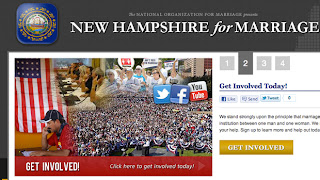 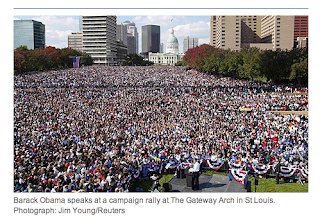 You can even see Obama in both photos.

Never have I seen such incredible arrogance. NOM gets caught stealing photos to boost up its number of supporters and its response to being called out is to play the victim.

That's like a thief crying foul because a homeowner hit him too hard in the middle of a break-in.

But that's the caliber of NOM.  It's the level of underhanded hypocrisy which the gay community has come to expect from the organization.

NOM continues to embarrass itself in photo scandal

Posted by BlackTsunami at 6:47 AM 6 comments:

Unfortunately some ignorant people are now trying to taint this event.

A local high school is being bombarded with phone calls and emails after students elected a lesbian couple to be homecoming king and queen this weekend, the district superintendent said Monday.

"I am disappointed that this happy and positive event has recieved national media coverage," Superintendent Bill Kowba said in a statement, "Which has attracted what I can only call a slew of hate calls and emails."

The non-traditional choice for homecoming king attracted international attention. Stories about it on online websites have attracted hundreds of comments. They have also prompted some very ugly responses directly to the school, which is in San Diego's suburban San Carlos neighborhood, San Diego Unified School District Superintendent Bill Kowba said.

Many of the adults who contacted the school are not residents of San Diego, and their comments were hateful and showed a lack of tolerance, Kowba said.

When you do something great, there is always pushback but generally this is because you are breaking barriers. These two young ladies, their peers, and the school in general should be commended not only for what they have done but for their courage in the face of such ignorance.

Posted by BlackTsunami at 5:23 AM 2 comments: